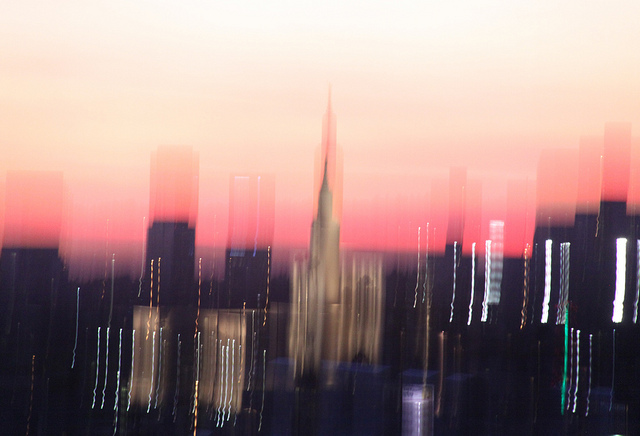 Los Angeles is a modern metropolis of four million people scattered across three hundred thousand acres. They wander in a rich vein of space between salt water and rock. To move from Santa Monica to Pomona is to experience a cultural and geologic shift reminiscent of international border-crossing. And yet all who live there seem changed, enacted upon by natural forces greater than their own.

The only way such a story, in such a place, could be told is to chop it up into more chewable bites.

This mix of propinquity and span provides a certain kind of fodder for writers, artists, and filmmakers who wish to tell their tale in the City of Angels. And like that greatest story ever told, they’re inhabited by all walks of life, those set to burn and those who will rise into paradise, and everyone else forgotten down below.

It’s these sinful land-dwellers who populate the latest L.A. story, Rockstar Game’s Grand Theft Auto V, taking place in Los Santos, a thinly-veiled version of California’s southern capital. This will be the first GTA with three main characters, each with their own storyline. And the choice makes sense beyond giving players a kind of agency; the only way such a story, in such a place, could be told is to chop it up into more chewable bites.

L.A has always been dissected as such. One of the more prolific documenters of Californian life, in all its excess and fad-following and freedom from the masses, is Joan Didion. Her novels are respected but it’s her journalism, collected in works like Slouching Toward Bethlehem and The White Album, where her observations and voice shine most brightly, depicting as she does the darkness surrounding us. (Even the titles of her work resonate with a Californian grandeur.)

The only way to make sense of a fractured whole is to depict it in pieces. With Grand Theft Auto V, it appears Rockstar is forced to yield to this.

One piece anthologized more than most is a short, slice-of-life essay called, appropriately, “Los Angeles Notebook.” Rather than giving a cohesive point through her singular perspective, we see the city fragmented into five separate chunks, each section numbered one through five. “There is something uneasy in the Los Angeles air this afternoon,” she writes, “some unnatural stillness, some tension.” Within the subsequent pages this tension shatters: a late-night radio show host bleats about the latest sex scandal; the author walks into a grocery store wearing a bikini to passersby’s chagrin; an actors’ party boils down into a bored, jilted wife’s malaise; a writer at an Encino piano bar speaks of Santa Barbara’s “putrescence” over the sound of Moon River.

Didion explains in an introductory chapter that she’s reacting to a sense of decay and disintegration. “Things fall apart,” she says, appropriating Yeats. “The center cannot hold.” The only way to make sense of a fractured whole is to depict it in pieces. With Grand Theft Auto V, it appears Rockstar is forced to yield to this sense of inevitability. Expectations have grown beyond what is possible to provide in a single thread. So we go to Los Santos/Los Angeles, with its contradiction of open spaces and closed-off prejudices, where a coyote might descend from the mountains and tear laundry off the drying line.

Los Angeles is a less stable patch of dirt. Rivers turn to highways. Underneath, tectonic plates rub up against each other, portending Biblical disaster.

But art has a way of turning ruination into triumph. (See: King Lear, Koyaanisqatsi, Breaking Bad.) Similar to Didion’s new journalism, Robert Altman’s film Short Cuts from 1993 takes the city and shines a light on its many cracks, giving us a mosaic of humanity that swirls around itself, like cloudy water down a drain. Altman took a series of short stories by Raymond Carver, themselves fractures of some larger, unwritten whole, and wove them into a narrative that flits from story to story, giving the viewer periphery glances at lives being lived in all their messy glory. In his review for the Chicago Tribune, Michael Wilmington writes that the film ultimately “show[s] how every city (especially L.A.) is, in a way, a community of the isolated.”

“Every city (especially L.A.) is, in a way, a community of the isolated.”

Grand Theft Auto V hopes to give you such authority: To jump back and forth, seamlessly, between the main storylines of Michael, Trevor, and Franklin. Let’s not compare the scope of Rockstar’s efforts with that of Didion’s damning precision, or Altman’s living, breathing collage. But we can applaud their shared choice of locale. If there is any place waiting to be explored while teetering on the edge of immediate destruction, of millions of souls together yet separate, it’s Los Angeles.

Nowhere else does the land itself defy crisp mastery of its rules. As any transplant will tell you, we soon learn it’s the city that swallows us. And if the Earth itself stays shut, the resultant energy from all that unmoved mass will find a way out. Raymond Chandler, crime novelist and creator of noir detective Philip Marlowe, set his 1938 short story “Red Wind” in L.A. on the night of a Santa Ana, a wind phenomenon specific to that area of the country. “On nights like that, every booze party ends in a fight,” he writes. “Meek little wives feel the edge of the carving knife and study their husbands’ necks. Anything can happen.” Sounds like Grand Theft Auto.