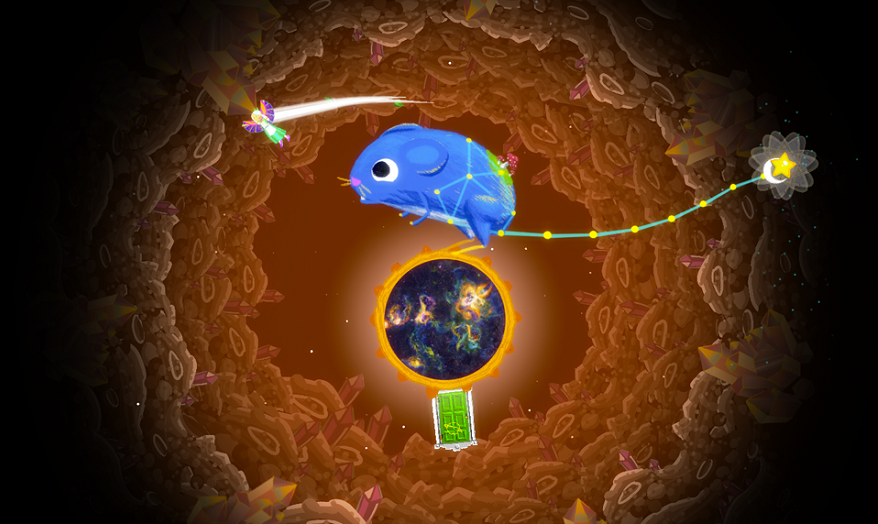 The developers at Ivy Games wrote that “Gravity Ghost is a game to soothe your senses.” I think they’re nuts.

If anything, Gravity Ghost is a game to confuse your senses. To turn your sense of direction upside-down and inside-out, and to interrupt your jammin’ and hippie space lovin’ with dialogue like, “You’ll get used to not pooping.”

At first, it’s serious business. Ben Prunty, the composer of FTL: Faster Than Light, did the soundtrack for Gravity Ghost, too. The music transfixes you in this state where all the sights and sounds coming toward you at once is like a dream. You play as a girl named Iona, wearing bright garb and painted in strange colors, who’s looking for her pet fox in an even stranger, more colorful universe. The stars are your map—the constellations dotted out in the shapes of wolves, rabbits, and other animals, the guardians of outer space. You plot them out each time you complete a level.

Doing so is as simple as collecting a star, but along the way you’ll pick up flowers to grow your hair so that it can better hold the animal spirits you meet. They need you to return them to their bones. Navigating them there is less simple.

Iona can move, and she can jump. The challenge comes when you’re mid-air (err, mid-space?) and the gravitational pull of the planets around you make you fly in a direction that’s hard to control. Some planets you hop to might make you bounce off them. Others are composed of ice, with slippery surfaces, or are transparent and pop like glass. Some have cores of fire, their heat radiating you away and making it difficult to land. They’re big and small, and they move around. The animal spirits you need to catch do too, circling opposite whatever direction you go in until you’re both weaving and floating in complicated patterns.

There’s a grace to it. As you advance, you gain powers (like holding the up arrow key to glide, or the down key to plummet) that help you move around more easily. You gain elemental powers that enable you to terraform planets, changing them from one type to another, to hard rock or bubbles of water with little worlds of fish and life inside. Fire, earth, water, air, just to start. A kindly mouse guardian raps about them.

It’s Mario Galaxy on hard mode. Yet somehow it works. The control scheme still eludes me, but I got where I was going eventually.

So do Iona and the other characters, and that’s part of the beauty of Gravity Ghost. It’s not just the colors, or the chalk-like graphic cutscenes that call to mind the art of Broken Age. It’s how everything—the stars, the guardians, the geometric shapes and symmetry—comes together with the story that’s served to you in disordered snippets. Because Iona is dead (not a spoiler), and she’s trying to make sense of it as much as you are.

She left people behind. A big sister. Her boyfriend, whom Iona didn’t like. Younger siblings. Friends. She also left trouble, but from the afterlife, doesn’t know how to resolve it.

It’s a sad game in more ways than one. A child’s death. An undeserved punishment. A family who falls apart under the weight of one crisis and then another, and another.

I wouldn’t have cared nearly as much with its humor, so misplaced early on against the serenity of the music, the beauty of reuniting spirits with bodies and the balance of the universe, and Iona’s own search for her deceased fox friend. I balked at its tongue-in-cheek writing, which seemed to clash with the mood and gravity-bending zone I was in. Iona is snarky, too. She’s bored. She’s indignant. In life, she resisted everyone and everything.

It took me awhile to realize. Without that humor, the story would have no buoyancy. It would sink beneath its heaviness.

The opening shows you a quote by American poet Charles Simic that reads, “Inside my empty bottle I was constructing a lighthouse while all the others were making ships.” It’s no coincidence that Gravity Ghost has both.

A wise woman tells you the riddle of the black hole, and how when loved ones leave us, they leave a gap so big that nothing in the universe can fill it.

You have to find a way to fill it and restore the balance, as with anything in life. A sense of humor’s just part of the symmetry.