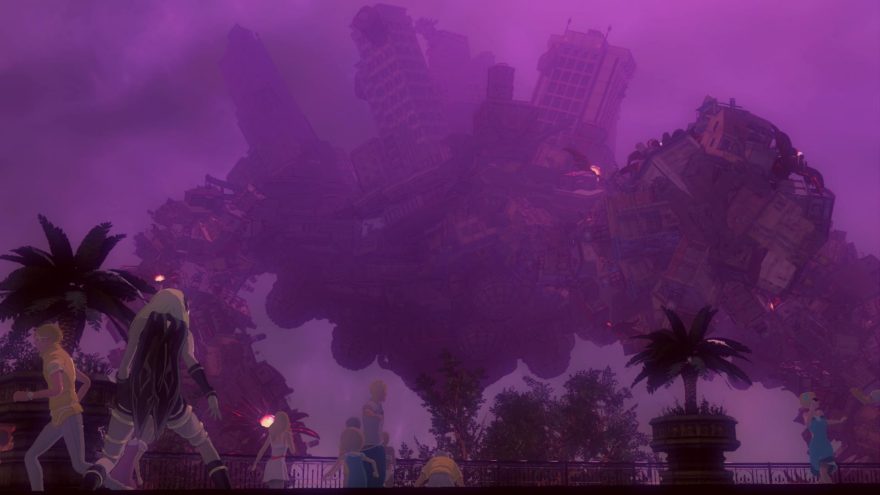 That’s the correct reaction to finding out that Gravity Rush 2 will have city-sized enemies. In fact, they actually are cities—the screenshot above is of a Ghost City, which “eats entire buildings, reconstructing them as limbs as it fights.” That is the coolest shit.

This info comes from a bunch of new Gravity Rush 2 screenshots that PlayStation uploaded to its Facebook account yesterday. Among them, it’s revealed that Kat, the game’s gravity-defying heroine, will return to the city of the first game and have a bunch of new alternate costumes. But the biggest news is that friggin’ Ghost City. All hail the city that walks, literally, and eats up the edifices that surround its knees.

Look, I kinda love the Gravity Rush series on principle: these are games that emphasize and have a love for architecture. The first game’s city of Hekseville combined signatures and sensibilities from Tokyo and Paris, it being produced by a Japanese team led by Keiichiro Toyama, who was fascinated by French sci-fi comics from the ’70s as a kid. Among them is Moebius (real name: Jean Giraud) and his graphic novel The Long Tomorrow (1975), which depicted a gargantuan city with an immense verticality, busy with vehicles that flew around the chasms between the towering skyscrapers.

the city should feel more alive …

That sense of height can be felt throughout Gravity Rush (2012), as Kat is able to fly high into the sky and suddenly drop, freefalling past the strata of living spaces carved into the floating city. You can run along the vertical faces of buildings, fly far away to get a grander view of the whole city, or zoom right in to get accustomed with the anxiety of the population. The city and its various divisions were characters in their own right. Gravity Rush 2 is only expanding on that sense of scale and culture, this time taking more influence from South America, which should give certain areas more color and energy. In other words, the city should feel more alive …

To find out that the game is leaning further into this commitment to having a huge, living city by making some of its enemies actual living cities just feels right. On top of that, I’m enjoying the idea that Kat is also able to repurpose architecture to use it as a weapon too. “Using the Stasis Field while in Jupiter Style allows Kat to create a giant Debris Ball,” reads one of the new screenshots, showing Kat hoisting a ball of junk in the air, ready to fire off like a huge cannonball. Fighting a giant, walking city with concrete and rusted metal may not be very effective, but I will do it anyway.