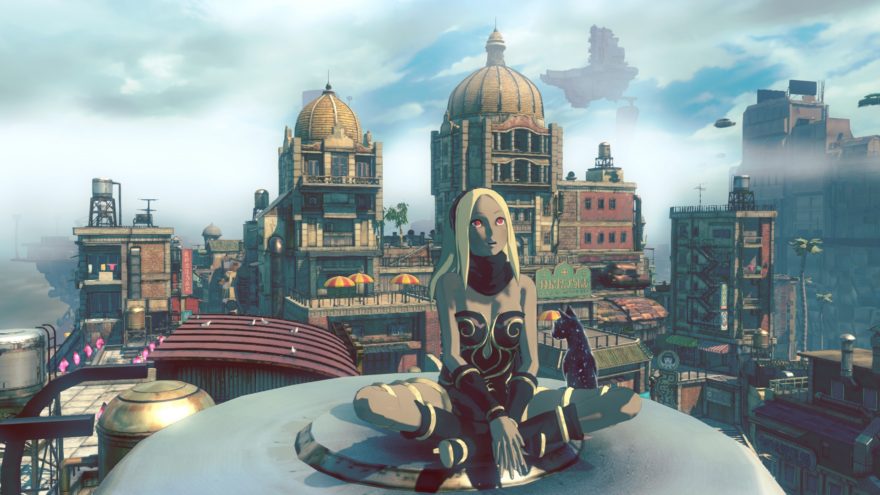 As a word, tourist is often pejorative. Like jogger is to runner, tourist is to traveler. One implies lazy trend-following and a profoundly uncool lack of self-awareness, the other an adventurous outlook and a sense of dynamic movement. You’ll be as hard-pressed to find a self-professed jogger as you will a tourist: we are all travellers now, or at least we like to think so. When it comes to cities, tourism also brings with it a kind of standardization—think of any city guide or map. Tasked with describing those complex organic machines we call cities, they often fall into gross over-simplification, in a method that seems almost like “district as genre.” You can often find “old town,” “downtown,” “entertainment district,” “cultural center” neatly labelled within often disparate and diverse cities, as if each city was simply a variation of a template.

The city of the original Gravity Rush (2012) was crafted from these exact concepts. Built from floating islands of ornate architecture, each district was separated and themed, divided into those recognizable districts with totally different architecture and residents. This felt like an entirely appropriate structure for a game that took its inspiration from the fantastical cities of 1970’s science fiction, casting both the player and protagonist Kat as wide-eyed visitors. Even the game’s beautifully drawn map appeared like a guidebook, marked with sights to see. To fall through its complex structures and climb its towering edifices had all the lightness of being a tourist of the imaginary, gliding across the surface and never going deeper.

However, for Gravity Rush 2, the developers at SIE Japan Studio have begun to take inspiration from more than just the imaginary. Speaking to producer Nick Accordino he explained how the development team was inspired by the cities they visited during a press tour for the original game: “they spent a lot of time in Mexico,” he explained, “they spent a lot of time in South America too.” It was a trip that clearly had some impact, as Accordino points out: “they wanted to incorporate a lot of that culture, a lot of that like South and Central America culture in there. And I think that’s very evident if you see the city.” It’s true that Gravity Rush 2’s city appears to be an entirely more “living” place. A colorful jumble of golden domes and bright parapets, its sun-baked buildings are layered with a litany of signs and adverts. The South and Central American influences don’t feel literal, but more atmospheric, mixed as they are with distinct Asian tones. That influence came from director Keiichiro Toyama, as Accordino explains: “Toyama-san traveled around Asia a lot too, so there’s a lot of like Asian influences on some other parts of the city.” That blend is evident in the cities name, Jirga Para Lhao, a neologism that combines Islamic, Hispanic, and Burmese words.

There’s a hint of exoticisim to this combination, but Gravity Rush 2 manages to sidestep such accusations through both its imaginative embellishments of these cultures and a particular new addition to the series: the concept of class. “The first game was kinda split up into four distinct areas of the city, but now we have a city that has lower tiers, higher tiers, and different classes of society in them,” points out Accordino. This change is part of a pursuit for an atmosphere he describes as both “familiar and individual.” It’s a recognizable idea; that cities are as defined by their class divisions as they are by their architectural traits, and suggests that Gravity Rush 2 aims to invest more believability into its fantastic world. “With any society,” points out Accordino, “you have the destitute areas, you have the medium income, and you have the people that are like high society, the aristocrats, right? So, you’re gonna kinda see that reflected a little bit in this game.”

This shift, from guidebook template to a city divided by class, seems to suggest a shift for the player and Kat—from tourist to traveler. While a tourist might be interested only in what they do, focused on their own fulfillment, a traveler might be more interested in how the people of the city live. In Gravity Rush 2 it is particularly interesting this shift might have originated in a similar shift in the developers, their journey transforming them from outsiders looking in, to explorers of unfamiliar streets. However, the idea of a traveler is just as much a performance of identity as that of the tourist, and consequently the difference between the two is thinner than we think. Sure, wander the streets of Paris and you’ll be able to pick the two apart, if only by their lack or possession of selfie-sticks, fanny packs, and sandals over socks. But head to Rajasthan, for example, and you’ll see both tourists and travelers wrapped in local scarves, and sporting ratty kaftans and “blending in.” It was there, among the sand-whipped streets of golden Jaisalmer that a local shop-keeper explained to me how puzzled he was by these “travelers” from rich western countries, “why” he asked me “do they enjoy dressing like poor people?”

Tourism and travelling, then, are explicitly connected to ideas of class. In fact, it is often so-called travelers, for all their superiority, that are the most guilty of exoticisim: the “authenticity” self-proclaimed travelers seek is inextricably tied to poor and working class areas. This is where the “real” city lives, with affluence often considered to be “spoiling” the “character” of a city. This perspective contributes to the “Disneyfication” of cities into theme parks as much as any whistle stop tourist tour. In reality, rudeness, ignorance, and fetishization are universal qualities, we can all possess them; traveler or tourist. As are wonder, openness, and wide-eyed curiosity. Lets hope Gravity Rush 2, in its travels, can find its way to the latter.

Gravity Rush 2 is slated for a 2016 release for PlayStation 4.

This article was based on an interview with Nick Accordino conducted by Clayton Purdom.