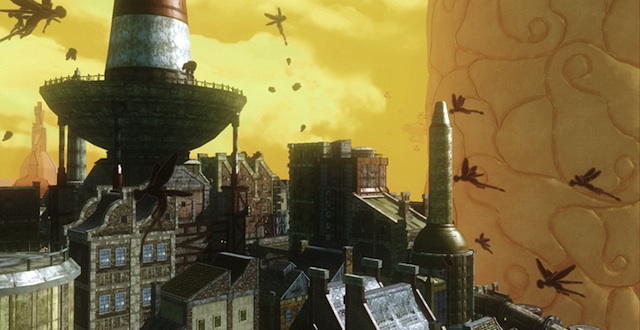 It’s a plot straight out of a Haruki Murakami novel: You and your magical cat go through portals inside the dilapidated Creator’s belly to bring together an archipelago of floating islands and recover memories about your origin. Gravity Rush has the trappings of a magical realist work, but as a game is far more rule-bound than a novel.

You control gravity by floating and pointing your PlayStation Vita screen the direction you want to travel. Push a button and you’ll fall; push again and you float until you can decide which direction to go next. Play long enough and you’ll find regular life dizzying. Technically you’re falling, but it feels more like flying. And walking beneath an island to find gems in nooks and crannies gives a thrill of discovery in places no one else could reach.

Magical realism accepts strange occurrences as part of daily life. Strange phone calls, dream walkers, and spirit realms feature prominently in Murakami’s works. Gravity Rush’s protagonist, Kat, fell from the sky and can’t remember where she came from. She can walk up and underneath buildings while the rest of the characters are limited to their sidewalks and trains. Although her special powers set her apart from regular townspeople, everyone seems to accept them, and the game never explains how Kat came to lose her memories.

The French-inspired fantasy language and mysterious enemies, and the comic-book pages that illustrate Kat’s origin, take the player to another world. The peaked roofs, wrought-iron fences, and school uniforms, meanwhile, are straight out of a period piece. This gives a sense of being in another world without the alienation of actually being there.

Gravity Rush has the trappings of a magical realist work, but as a game is far more rule-bound than a novel.

But Gravity Rush lacks the feeling of mystery that magical realist works commonly evoke, because its gameplay fits squarely in genre territory. As an action role-playing game—where your character levels up her abilities to more successfully combat enemies—Gravity Rush is based on fairly predictable systems. While it feels nice to level up how long I can stay in the air before leveling up my health bar, using my hard-won gems, these levels also indicate the abilities’ limits, and by extension the game’s limits. The status bar that displays the progression of each ability has a definite “full” point. Gravity Rush allows you complete control over the growth of your powers, but by doing so loses some of the magic of play, and the mystery of magical realism.

Like in Zelda games, you can choose to wander around or complete specific missions. If the world you’re in is big enough, it’s a pain to reach places, which necessitates warp points—sites that instantly transport you elsewhere. Gravity Rush also includes challenge levels, where a perfect, quick performance of certain skills is rewarded with more gems.

Having missions in the game means that there is a distinct beginning and ending to these sequences of play, giving Gravity Rush a structure clearly navigable by the player. A useful contrast might be found in surrealist games like La La Land 2 and Yume Nikki, which have vague ongoing objectives, purposefully illogical systems, and unclear beginnings and endings. A description of Yumi Nikki’s Candle World reads:

It’s a world filled with, yes, candles. There’s a dwarf running around near the middle of the world, and if you can manage to catch him you get the “Midget” effect. There’s a building that leads to the Tile World with the Lunatic Toriningen. Next to a Toriningen is a bed, and as many know this Toriningen is abnormally fast when made lunatic.

The objects in such a game are from the real world, but are warped into things that wouldn’t make sense in even a fantasy. As a result, the gameplay itself is unpredictable. Likewise, the reader of a Murakami novel knows magical things will happen, but doesn’t know if the mechanism will be through a strange visit, a dream sequence, or getting stuck in a well.

In Gravity Rush, we know the mechanism all too well: to further the story, the player will have to complete the next mission, which will involve cut scenes and killing monsters and talking to non-player characters. And though it’s remarkable and fun to control gravity, this too must abide by predictable rules. It’s the only way you can get anywhere.