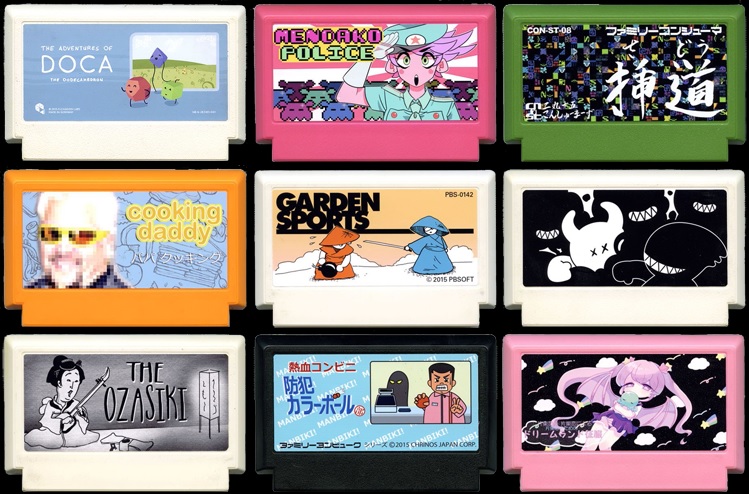 What do you get when you combine the world of fake Famicom case cover art and game jams? The “A Game By Its Cover” jam, actually, which is making its triumphant return on June 30th.

Being the Japanese precursor to the NES, the distinctive red-and-white Famicom has a great deal of nostalgic power over people who grew up in the early 80s—even if it doesn’t closely resemble the American, VCR-looking version of the console. The A Game By Its Cover Jam sorta banks on that. It encourages game makers to spend a month creating games based on faux Famicom cover fan art.

a Famicase for every gaming persuasion

The premise brings these Famicase games to life, as if from an alternative dimension to the NES. From the bold-flavored, Guy Fieri-themed “Cooking Daddy” to the brewery-themed adventure game “Hoppy Hops,” there are plenty of possibilities. With over 10 years of potential fan cases to use, there seems to be a Famicase for every gaming persuasion. This ranges from the comedic (again, see “Cooking Daddy”), to earnest 16-bit riffs like last year’s entries Morning Star Girls and Every Sport Ever in Pong Form. In 2012, the jam was a competition and helped inspire such works as Tales of Unspoken World, which later went on to become the first-person runner Fotonica.

In the spirit of creation, the only rule is that there are no rules. Participation in the month-long jam can start before the jam begins, participants can work on teams or on their own, and the games don’t even need to be based on the awesome cover art of Famicase. But with the years of Famicom-inspired-goodness, it’s a bit difficult to resist.

The jam, which starts June 30th and runs through August 1st, is already live on itch.io, so anyone interested can explore the community and potential Famicase covers.