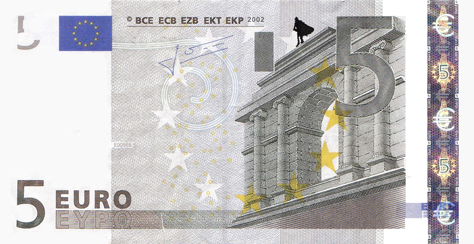 This, it is fair to say, is not how the European project was supposed to work out. At this very moment, German citizens can walk up to an ATM and withdraw their daily limit. At this very moment, Greek citizens can wait in line near an ATM in the hopes of eventually withdrawing their government-limited 60 Euro daily allocation. (On the bright side, Business Insider observes, “Greece isn’t panicking about capital controls because millions of people are already too poor for it to matter.”) The only thing Europeans at banks in Athens and Berlin have in common is an infinitesimal chance of receiving a work of art drawn on a banknote.

These drawings are the work of a Greek artist who goes by the name of Stefanos. Many of his illustrations show tiny characters hanging from and falling off the bridges on Euro banknotes. “I always use black ink ball-pen and draw human figures using headlines from the media, whenever violence or poverty is reported, I transfer the message on the medium,” Stefanos told the London Review of Books’ Scott Anthony. One of his banknotes is filled with tiny figures storming into the foreground through brick archways. It’s not entirely clear where they’re going but the watermarked continent is underfoot. The revolution is nigh. “I’m using a European document, that is in cross-border circulation, to bomb public property from the comfort of my home,” Stefanos informed Anthony.

The beauty of “banknote hacking” is that the end result often remains legal tender. In March, the death of Nimoy was greeted by a call to action from The Canadian Design Resource urging Canadians to “Spock” their five-dollar bills. Raised eyebrows and an advanced hairline were drawn onto Sir Wilfrid Laurier and the result was both Spock and a five-dollar bill. More radically, as part of her “My Money, My Currency” project, artist Hanna von Goeler has painted her concerns about money onto American dollar bills.

realign the face of the Euro with the lived reality of Greece.

Fiat currencies like the Euro are mainly ideas. They do not represent fractional claims on tangible goods. Instead, they function because people believe in the promise they represent. As such, the artwork on banknotes plays an important role in creating the impression that we are all part of a shared community of interest. “Euro banknotes needed to be acceptable to everyone in the euro area,” the European Central Bank explains in its history of the currency.

To wit, in 1994 an ECB working group came up with eighteen generically European themes for banknote designs including “Abstract theme and security” and “Aspects of Europe (things vital to the existence of a united Europe, e.g, communications).” Mercifully artists were only asked to propose notes for two themes “Architectural ages and styles of Europe”, “Abstract-modern design.” It was ultimately decided that Euro banknotes would feature bridges that represent different architectural periods in European history. The bridges had to be fictional to avoid slighting the architecture of Eurozone nations; there just weren’t enough banknotes to keep everyone happy.

Much as a fiat currency fails when its holders lose faith in its underlying promises, the symbols on a banknote fail when they cease to have any relationship—even a metaphorical one—with the facts on the ground. Stefanos’ hacked banknotes attempt to realign the face of the Euro with the lived reality of Greece. Sure, this reality isn’t shared by everyone within the Eurozone, and that is a big problem, but the beauty of sending a message on currency is that the shipping is free.