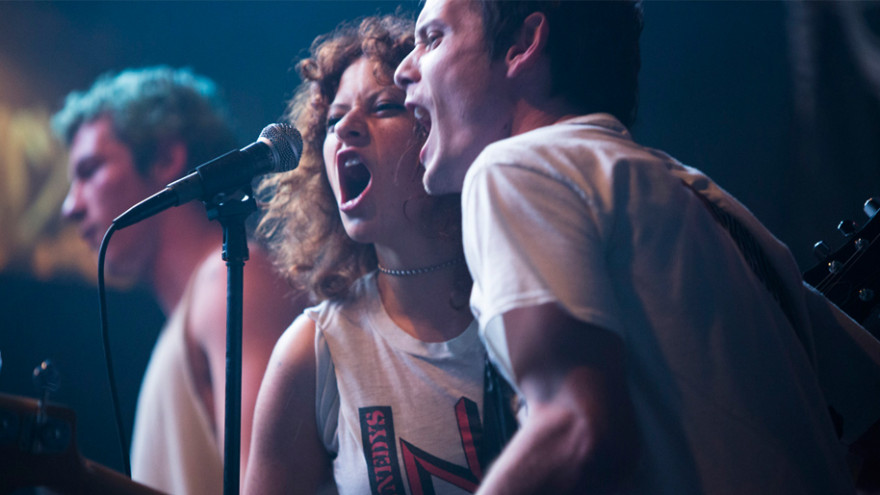 “I like murder,” Green Room director Jeremy Saulnier confessed in a post-screening Q&A. This comes as no surprise.

You might know Saulnier’s 2013 film Blue Ruin. If not, imagine a revenge movie where the protagonist does literally everything wrong. I wasn’t hot on that movie: it just didn’t click with me.

But Green Room? Green Room tore my face off. It’s a ferocious action flick about a punk band who stumble on a murder (there it is!) and have to fight for their lives against a horde of white supremacists led by a restrained, imposing Patrick Stewart.

The film is beautifully crafted. It’s the first film Saulnier hasn’t shot himself, instead enlisting DP Sean Porter (Kumiko, the Treasure Hunter). Porter does an amazing job. It’s shot on digital and given an ethereal, earthy color treatment; shots are framed with purpose and put together with care. And the soundtrack! Jesus Christ, the soundtrack. It’s stacked with 80s hardcore and a bevy of hesher favorites from Midnight to Napalm Death. Slayer’s “War Machine” plays under a pivotal scene. The film understands the culture it’s portraying down to the 20-eye Docs, which lets it smartly fold in subtext to the action.

The Ain’t Rights antagonize their fascist audience early on with a cover of “Nazi Punks Fuck Off,” which sets up an ideological conflict between them and their attackers. The band wields hardcore’s throat-shredding intensity in service of left-wing politics (“music is for effect,” they say); the skinhead audience they’re fucking with (one character stresses they’re not neo-Nazis, specifically) holds “racial advocacy workshops” on the venue’s off days.

Saulnier said his intent with the film was not to go highbrow after the success of Blue Ruin. If the guy next to me recoiling, covering his eyes, and gasping in his seat is any indication, Saulnier’s got nothing to worry about. This is a hideously violent movie: knife wounds, dog bites, shotgun blasts, and a gutting-by-box cutter are given nauseatingly effective effects treatment. Between the gore, the smart script, and the music it’s pure bliss from start to finish.

As for an “emotional arc?” Keep an eye on that wandering dog.