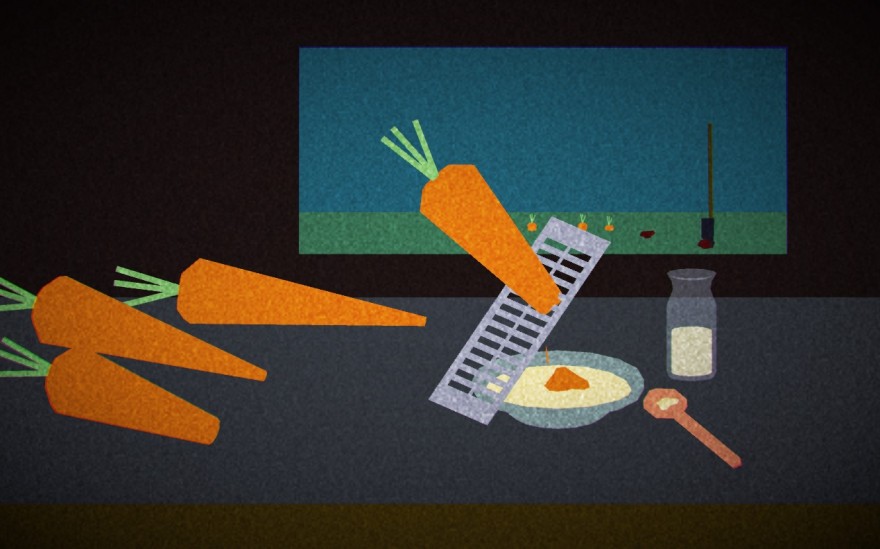 I’m struggling to eat bananas these days. It’s Facebook’s fault. The damn thing is ruining my diet. I logged on one day to an auto-playing video of a spider breaking its way out of a banana. The devil of a thing pierced the skin from the inside of its fruity carriage and crawled out of it, into my nightmares. Now every time I bite into a banana I expect to feel hair and legs in my mouth. This is a problem I have now.

Luckily, I’m not such a big eater of carrots. For if I were I think playing the Asylum Jam entry Carrots and Cream would have been similarly detrimental to my life. As with that spider video, it uses food horror to worm its way into your fears and upset your stomach. And it’s done with an almost Hitchcockian reveal that has you spinning on the suspense it weaves.

It starts with you digging carrots out of the earth with a spade. The garden tool oscillates across the screen and you have to time your button press so it lands in the right spot for unearthing the vegetable. It’s an everyday activity with no sign of anything horrific about to happen. But there is at least an uneasiness in the grainy image and rumbling screen shake that accompanies this scene. Something’s off but you’re not being shown what it is quite yet.

Next up you move into the kitchen where you’ve got to grate the carrots into a bowl. You move your mouse up and down to mimic the grating action. So far, so good—this is actually an enjoyable cookery game. You might think you’d be happy to prepare a whole meal like but, uh oh, here it comes: the twist. The next scene goes back in time to reveal that there was a worm eating through the carrots as you dug them up. This is where Carrots and Cream‘s horror splits in two.

On the one hand, you have the type of gross-out humor that Peter Jackson employed in his 1993 horror-comedy Braindead (or Dead Alive). In it, there’s a disgusting dining table scene in which protagonist Lionel tries to get his zombie mother to eat a mannerly meal with two guests she needs to impress. It ends up with her ear falling into her bowl of custard and then eating it. The way it’s shot with close-ups, the sounds, and urgh… yeah, it’s enough to make you gag.

In Carrots and Cream, the same type of disgust is called upon as you imagine this worm being inside the dish you were so happily preparing a moment ago. You don’t want to, but if you’re anything like me you imagine the taste and texture of eating this worm. This is before you even know where the worm is and even if it made its way out of the garden. This is the suspense. Where is the worm? Now that it’s a part of the scenario you’re left waiting to find out when and how it’s gross-out gag is going to appear.

The other type of horror that the the game employs here is a simple chase sequence. You don’t just watch the worm escaping the sharp digs of the spade but have to move it like an accordion through the soil so it doesn’t get killed. Go to slow and it’ll meet a grisly end. It’s weird, despite the worm being a source of disgust, you root for it to survive.

Anyway, it’s in the next scene, when we return to grating the carrots, that the two horrors then brilliantly collide. You can guess what’s coming … I’ve already half-spoiled it, but you should experience it for yourself to get the full horror first-hand. Unless you’re a big carrot eater then, um, yeah, probably don’t do that.