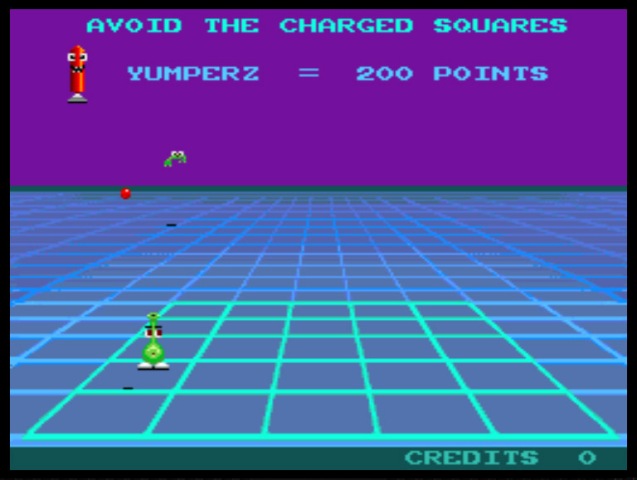 The story of Gridlee is a kind of dream deferred. Originally programmed for the arcades during the early 1980s heyday of pellet-gobbling and starship-shooting, the game was never officially released. Until now. Available on iOS for free since last week, it’s both a compelling amalgam of classic mechanics, and a prescient look at how, in 30 years, gaming has evolved at a near-ravenous rate while remaining true to its simplistic roots.

You control a kind of squeeze bottle with feet. Need I go on?

DNA from both Q*Bert and the Snorks are evident in the character design. The game conforms to the conventions of the time, with a single playfield and rapidly advancing difficulty. Play occurs in some electronic dystopia, a flat wasteland comprising an infinity of intersecting lines. This could be the inside of your Apple II C circa 1982, the year of its development; this could be Death Valley one hundred years from now, after the computers replaced sand and dirt with the cool blue glow of a screen.

You waddle around a 5 X 5 grid. Atop your head is a small hole; with this you catch bouncing balls for extra points, but it is also your weapon. Strange creatures bound toward you from the deep background, eventually jumping and landing in square after square. Once it lands, the space is electrified and anything standing on it dies. You must move underneath them and shoot before they land. Red enemies called Yumperz look like tentacle-less squid; green hoppers called Fergies, a nod to Frogger, bounce in unpredictable patterns.

Behold, a deep and bountiful spring.

The horizon is far in the distance, visible, yet you’re trapped by unseen walls. You’re only choice is to consume or expel. Others invade your small square of property; you’re never not been encroached upon. You never get closer to your goal. All you can do is gain meaningless points. To survive is to push back the inevitable. Even in this barren techno-void, the water is always rising.

Created by a small team named Videa, only a single machine was produced. Co-founders Howard Delman, Ed Rotberg, and Roger Hector can now see their vision recreated on thousands of screens decades later, due to David Valdeita and his work on emulating the original ROM for use on Apple’s many devices. Had it been distributed properly, Gridlee might have carved a small but devoted following, like a Mappy or Quantum. Or it may have blown up and rivaled contemporaries Missile Command or Zaxxon.

But its true success lies in our ability to play this game now, a quarter-century later, as if unearthing some hidden well long thought to have gone dry. And yet–eureka!–water flows. Behold, a deep and bountiful spring. Whether you go forth and drink is up to you.