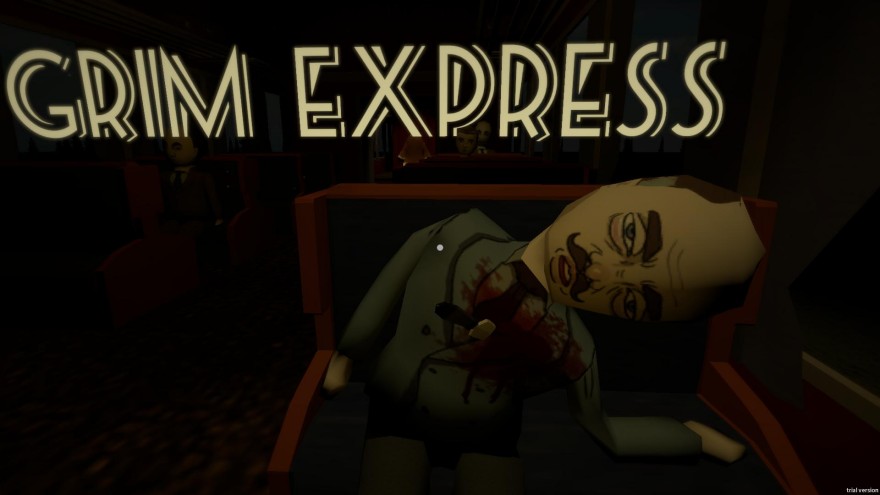 Within the first 10 seconds of Grim Express I’ve witnessed a doctor transform from dozy-eyed alive to outright dead during a brief blackout on a moving train. The blade in his chest, and the gore smothering his olive green suit, suggests that it wasn’t old age that killed this graying man of medicine.

And yet, there was something very Phantom of the Opera about the whole ordeal; like I was sat in the front row of a theatrical magic act. One moment the doctor is alive and the next a bloodied knife is stuck in his chest—ta-dah! Am I supposed to applaud or be horrified? This question goes unanswered as a title announcing that this is “Grim Express” intrudes upon the scene. The typography is so brazenly Fritz Lang in taste that I take a mental note to look out for the letter ‘M’ chalked onto someone’s back.

Stalinism is spreading and “class” is a forbidden word

This is supposed to be a short murder mystery, with me playing the manifold roles of justice—detective, the honorable judge, and even the jury. But, upon gaining agency, I can’t help but get carried away by the set dressing of the train’s carriage. We’re in 1930s communist heading towards on the Trans-Siberian Express. Stalinism is spreading and “class” is a forbidden word, meaning that this car with its bar, cushions, and private cabins should be referred to as being in the “soft” category (as opposed to the significantly less luxurious “hard” one).

Luckily, my casual obsession with the decoration and items littering the floor of this train’s cosy innards isn’t amiss. It soon transcends that I’m looking for clues to build as evidence against each suspect of this spontaneous murder trial. Those I deem the culprit will be thrown into a gulag and forced to work through the winter.

The trio I’m interrogating could rightfully be called “the usual suspects”: The doctor’s adulterate wife, her lover and knife-throwing circus performer (complete with villainous moustache), and the doctor’s patient who has recently recovered from a belief in capitalism after 10 years in an asylum.

It is possible to make a wrong accusation. Finding all of the evidence and asking all possible questions should lead you to a fairly obvious conclusion. When you happen across it, Grim Express suddenly seems very… straight-forward. You’d think that a team so dedicated to accurately depicting the lavish interior design of an iconic Russian train would have something more to say. I was really hoping that they would.

There might be an implicit commentary on the relationship between capitalism and communism, and possibly a criticism of cultural indoctrination, but that’s grasping at straws. No, Grim Express leaves you to ask the questions while it keeps its relationship with Russian politics and culture strictly within the interest of style.

Considering it at that level puts it in the same airspace as Double Fine’s Stacking and Blendo Games’s Thirty Flights of Loving. It’s the kind of videogame you’d recognize at a glance of a screenshot. It’s just a shame that it’s so ripe for political discussion yet the team behind it have restricted their audacity to the typography. To their credit, Grim Express was created in just 48 hours, so perhaps there’s room to expand upon it yet.

You can download Grim Express for Windows by clicking on this link.