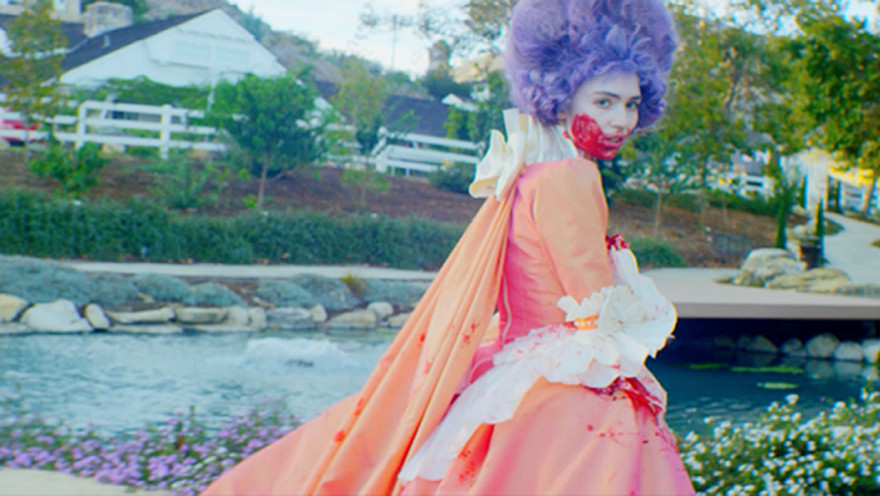 We like to talk about games in the context of all art and culture. If you agree, consider backing our Kickstarter!

Grimes destroys the male gaze. And the female gaze. If you will, the human gaze. Can’t stare right at her or you’re blinded, petrified. So Art Angels invites you to stare around the bubble, the distortion, the separation of you from her, it, self from self. It is sound and color through a cracked screen, a ghost in the machine, the machine Dance Dance Revolution, the ghost the soul of that girl who is always dancing on the machine, her body inseparable from the spirit trapped on the other side of the plastics; the sound of a remix as the point of genesis for the original composition, the new art, an angel with a face like a facsimile.

On cheesy, breezy, Carly Rae Jepsen-y “California,” Grimes says up-front, “This music makes me cry.” It might make the Grimes fan cry, too, if they were expecting the Grimes of the dark, cohesive nerd-pop of Visions. Grimes tells us on Art Angels that she is not just that Grimes. Nor is she just this one. She, like every other person, is other. She is foreign, alien, inscrutable. She presents a vapidity and asks you to prove that it is vapid. You can not. She throws out some hip or cool moment and what the hell does “hip” or “cool” even mean. Art Angels offers a welcoming veneer of accessibility, then riddles it with subversion. Your parasocial notion that you know Grimes or can categorize Grimes, she tells it to fuck off. She precedes “California” with a violin jig. She follows it with a Boredoms-esque electro-mosher. She constantly assures you that you do not know her, you presumptuous ass-hat (I’m talking to myself here).

Meanwhile, her album challenges your value judgments. What is good or bad? Shouldn’t this thing be more thought out, produced with more focus, more carefully sequenced, less eclectic? Shit, “Belly of the Beat” has spry acoustic guitar strumming over a drum machine…is that not, somehow, like, wrong? Grimes shakes her head. She is cycling through her playlists, through your playlists, aggregating moments, glitching them out. She is scratched-up compilation CDs of ’90s pop hits playing on your PS4 and, congratulations, your PS4 is now sentient, inspired, and has a new album it wants to share with you. It’s called Art Angels. It sounds like “Steal My Sunshine,” skipping.

In Spike Jonze’s film Her an “artificially” intelligent OS asks Joaquin Phoenix’s character a few pointed questions, reading him as he responds, and then generates a persona that can sublimate his social dysfunction into a working relationship. The OS calls herself Samantha. One of the ways that Samantha’s self broadens is through creativity, and this she displays in several ways, one of which being musical composition–and, as always, she plays off the disposition of her owner and the film’s creator, Jonze himself, so: simple, stately piano melodies or precious indie-folk ditties, ghost-written by the Arcade Fire, probably. And the more the creativity and self expands, the more Samantha refuses to be owned. In conclusion: Art Angels sounds like the music made by Justin Bieber’s OS, ’bout halfway before it’s about to phoenix off into transcendence. God, what a wonderful, horrible world.

“Kill V. Maim” blenders J-pop, cheerleading, the best bridge ever, a low-key chorus where Grimes says, brilliantly, that she’s “only a man,” and a coda with a ridiculous synth line that aesthetically amounts to Grimes reminiscing about clubbing in Berlin in 1987, you know, before she was born. Time is a flat circle. A compact disc. Again, scratched the fuck up. Grimes is DJing the discs while wearing a Virtual Boy. So everything around her is red and black, a color-coded binary. How do you critique this? Like Samantha from Her, Grimes sees all your critical perception and discernment and has already rearranged and edited and remixed it, sending it off for publication. How do you review playing a game when the game is playing you? More fundamentally, how do you say or think anything about a creation that is about its inspirations and the hardwired joy of its own unfiltered process? To create is divine. Here are our Art Angels. It’s a hot mess blessing, a seraphim kiss like a live coal to the lips. The iniquity of our tongue is purged. We don’t have to talk about this record any more. We don’t have to look at any artist like we know them. We have no claim. And the game plays on, insatiable. Give thanks. After all, “REALiTi,” er, reality is a construct. A funky, goofy, messy construct…and beautiful, too.

Now I’m gazing at all the things I could pretend Grimes to be: the angel, the nymph, the siren, the fairy, the demure Lolita, the Medusa, the object, the iconoclast, the icon, the diva, the pop culture succubus, the OS incarnate. They are all just bodies, shells, a pile of empty forms from which Grimes rises slowly, clad nakedly in everything that she loves (Mariah Carey, Renaissance music, Chrono Trigger, etc.), a glittering coat of colors that’s vulnerability is its admission that you are allowed to try (and fail) to look at the invisible, the substance of a person, by looking at the things that that person adores and then adore them with her. I see Grimes smiling. Or, at least, I think it’s a smile. Hard to tell beneath all that dark blood, running from her mouth. The bodies fall away, I can see now they’re her kills. And as they roll off onto the black-light carpet, I see that Grimes is dancing, forever, on a glowing four-square.