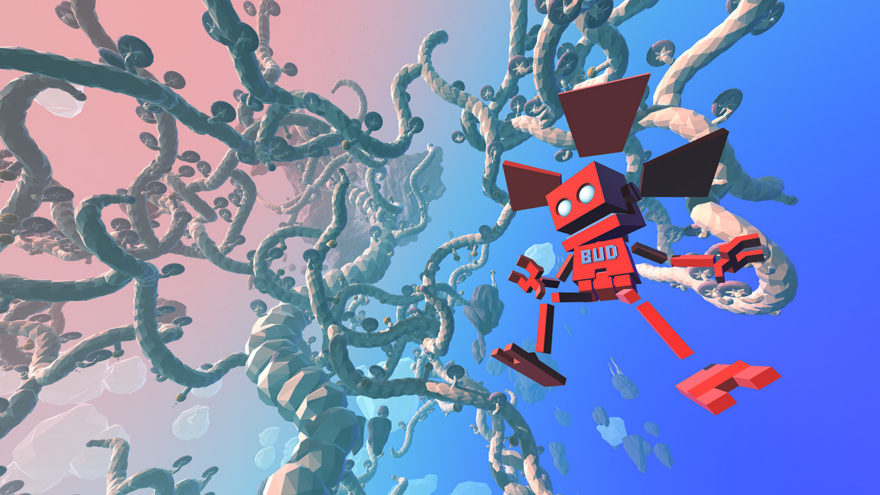 It was a welcome relief amid all the Just Dance-ing and Watch_Dog-ing at Ubisoft’s E3 2016 press conference to see the reveal trailer for Grow Up—a sequel to last year’s charming plant growing/climbing game, Grow Home. BUD, the red, stumbling robot from the first game reprises his starring role, and is tasked once again with clambering across all manner of enormous flora to locate parts of his spaceship, presumably to head home once more.

Grow Home was an unlikely hit last year. It was developed by an eight-person team at Reflections (known primarily for their driving games) as an experiment in procedural character animation, and seemed to carry a torch for the older 3D Rayman games more than anything out of Ubisoft’s modern catalog. Think about scaling the giants in Shadow of the Colossus (2005) combined with the controls of Octodad (2014), and you’re at least halfway there.

The trailer for Grow Up looks like Grow Home on a grander scale, but how different that scale will feel for players remains to be seen. Instead of one tiny base island, there appears to be an entire planet from which to begin sprouting climbable tendrils. Additionally, the trailer shows BUD riding a jet-powered hang glider that would come in pretty handy if the game world expands laterally as the spherical base implies. It’ll be interested to see how Grow Up applies gravity to these surfaces as maintaining balance on narrow stems was such a key component of Grow Home that could be undercut if gravitational pulls are too sticky.


Personally, I’m hoping Grow Up acts as more of a variant to the original game than just providing an exponentially larger world. Some of the expanded traversal options in the trailer hint at some possibilities on that front, particularly BUD’s ability to clone plant life. Certainly, being able to sprout a springy mushroom on the spot could provide an escape from an otherwise isolated platform, but it’s unclear if this ability will result in anything more than just portable trampolines.

If nothing else, it is great to see an iteration of BUD’s hapless constitution. The robot’s swimmy grasp of the concept of walking was endearingly frustrating to control, like trying to direct a toddler to stand and take their first steps… then to grab a sheep and drop it down a mountain slope. Typically, in sequels, developers refine things like controls for increased fidelity, but BUD’s movements are characteristically somewhat broken, so I’m also curious to see how Reflections balances those priorities. The game is called Grow Up, so maybe it makes sense that BUD will follow suit and evolve a bit.

At the end of the four hours it took me to reach BUD’s spaceship in Grow Home, I was ready to put the Miracle-Gro back on the shelf for a while. When Grow Up releases in August, it will have been a mere 18 months since Grow Home’s debut. Hopefully my green robot thumbs will be ready for another round in the Star Plant garden by then.

You can find out more about Grow Up on its website. It comes out for PC, PlayStation 4, and Xbox One this August.