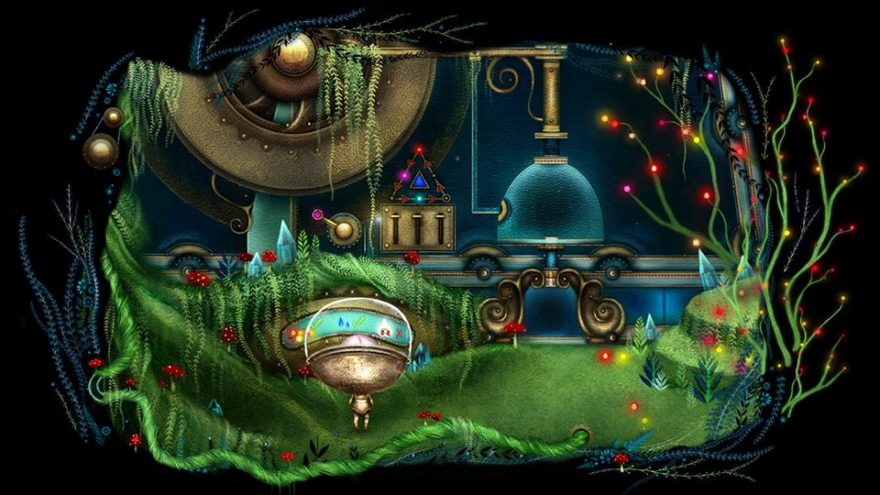 Children’s books used to have a more strange, haunting quality; think Wayne Anderson’s Ratsmagic (1976) and The Magic Circus (1978). Books had a sense of darkness, and not every tale was meant to be safe and moralizing. Growbot, an upcoming 2D point-and-click puzzle adventure, is a game that evokes the strangeness of Anderson‘s classics. Created by illustrator Lisa Evans, it’s a game that draws from classic children’s book through its art and narrative.

“These kinds of narratives are rarer in the [children’s book] industry these days, because in order to get in front of an audience you need to go through the gatekeepers of the publishing industry,” Evans said. Games, in comparison, allow for some experimentation. She attributes this to programs like Steam Greenlight. “It seems to lead to much more diversity in stories and experiences than children’s books currently enjoy.”

Growbot is about Nara’s terrible first day at school. She’s a student on-board a space station when an unknown force attacks the ship, cutting off communication with rapidly growing crystals. Not good! Playing as Nara, you’ll have to search the space station for help, solving puzzles to fix the station’s wacky and weird equipment while figuring out where this crystalline force came from. So while it’s a narrative game, puzzles will push the story forward—a feature that’s new for Evans. This is her first videogame. “I wanted to push myself further out of my comfort zone and think about the player’s experience in terms of the verbs they can use to interact with the world,” Evans said. “It’s also another way of bringing the world’s I like to imagine to life, helping to pull players into the world.”

“In a game, you have to justify your ideas more”

Tove Jansson’s Moomin books are an influence in Evans’s career; particularly, the idea that Jansson’s books have “a world where bad things happen not to be corrected by the heroes, but as a simple fact of life.” The dramatic problems in the Moomin books tend to be less about villains, and more about natural disaster—”floods, comets, or a long winter,” Evans said. For Growbot, that natural influence is the mysterious crystal entity consuming the space station.

Creating a world with depth has been a challenge for Evans—albeit, a good challenge. “Making a game has been way harder than building a book,” she said. “If I want to create a piece of strange machinery in a book, I can draw it without thinking too much about it and the viewer is free to imagine its function.” It’s different in games, though, of course. “In a game, you have to justify your ideas more,” Evans added. “The machinery should have a purpose and the player should be able to do something with it that changes the environment.” The Unity engine, in that way, has been helpful in regards to creating those systems—in particular, the Adventure Creator plugin. Evans started the process of creating Growbot without needing to code, though she’s picked that up on the way, too.