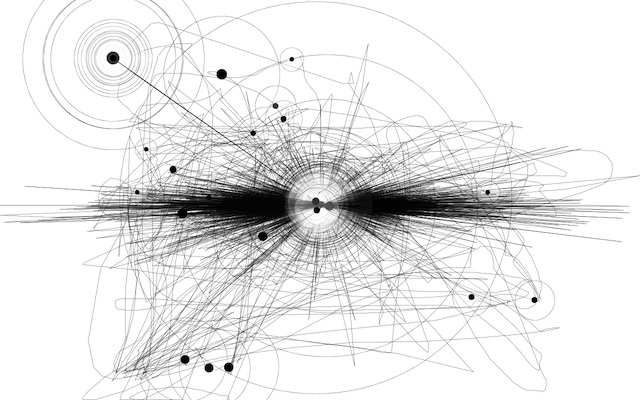 We now know what a first-person shooter looks like when your mouse’s gestures are plotted out (above), thanks to a Redditor named Derpasaurous.

“In those days, I believed firmly that the future of computer games was all about AI. That in twenty years time we’d be interacting with NPC characters in computer games that actually had real intelligence. Boy, I was wrong.” The creator of X-COM on the squandered potential of AI.

Elsewhere, The New Yorker’s Elements goes in depth with an AI that has learned to play Super Mario Bros. better than I can.

With Samsung’s mind-controlled tablet, the future is now. If only the future didn’t make you look like a psychopath.

But, all is not lost. The future has the potential to be very fashionable and badass, as this feature on a young woman with a bionic hand attests.

Rockstar has released a hypnotizing and bizarre viral video for Grand Theft Auto 5. How does this relate to GTA again? Oh yeah, Epsilon Program was a religious cult from San Andreas.

A mysterious record by Boards of Canada was discovered in New York on Record Store Day. Speculation says it’s the first piece of a puzzle revealing their next album. We can hope!

Business Week plunges into the abyss of Eve’s virtual and real-world economies. CCP Games got monies.

“Ours was an arranged marriage and board gaming just sounded like a strange hobby. But it grows on you.” From an article on how Euro-style board games are gaining popularity in Bombay.

Jealousy is just love and hate at the same time!