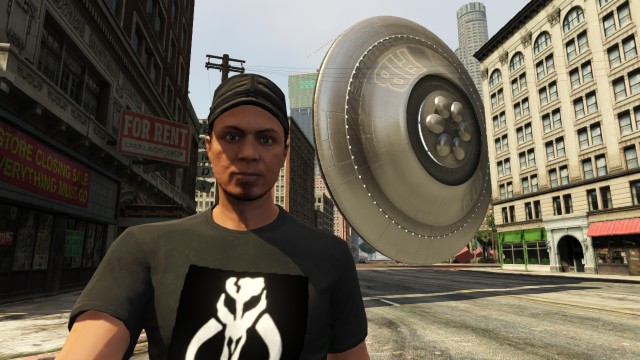 It seems GTA Online is experiencing an increased level of alien activity, with a number of players posting videos and selfies of flying saucers crash-landed in downtown Los Santos. As you can see in the video below, these cylindrical, metal spaceships—typically found leaning on their side against tall buildings—spur the sheer batshit pandemonium one expects in a glitchy, chaotic game like GTA, with sirens screeching as the magnetic pull of UFOs rips asunder a parked car, then drags a convulsing firefighter through the street.

In case you’re wondering what the hell is going on here, there seems to be two competing conspiracy theories. One is that modders have hacked the system to bring those confirmed-real FIB flying saucers, occasionally spotted levitating in the horizon, to the ground. The other is that Rockstar is behind it, and this is the initial out-rolling of some alien-themed episodic content, similar to the Winter Wonderland DLC back in December.

Of course, the GTA series has a reputation for blurry video footage of elaborate hoaxes and urban myths, like yeti sightings and CJ’s mom’s ghost, so every downed UFO should be taken with a grain of salt.