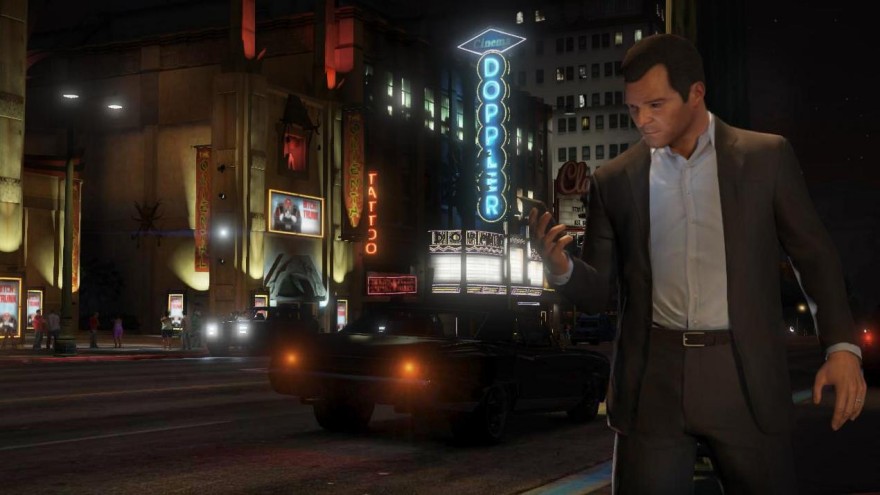 The modern smartphone is a thing of beauty. The shiny beveled edges arrest the eye. You glimpse a speck of your reflection in the semi-lustrous finish. The golden sheen of the metal casing colors our world like so many pairs of Aviators. And that’s before you press a button.

Much like our real-life Androids and iPhones, Grand Theft Auto 5’s in-game phones reflect the things society values most. The game’s assortment of Badgers and iFruits are used less for talking, but divulge more revealing aspects about the people and the times. Yeah, Michael may be a rageaholic, but, hey, at least he sends his therapist passive-aggressive emails. And while Lamar remains a sociopathic scumbag for the duration, his contact picture doesn’t contradict it. It’s a snapshot of his pet Rottweiler, as if he could only relate to some vicious beast.

The game has something to say about the vast majority of cell phone-loving Americans.

These virtual phones shine an ultraviolet light not just on the scum, but on all of us. While GTA5 as a piece of social criticism sends mixed messages (procuring a prostitute is encouraged, but testosterone supplements are despicable), the game has something to say about the vast majority of cell phone-loving Americans. It’s more of a funhouse mirror style of satire, something in the vein of a work like William Burrough’s Naked Lunch, which makes no moral judgements, but hysterically exaggerates fetish and vice, unappetizingly revealing what’s on the end of everyone’s fork. This goes deeper than shitty food porn.

At first blush, the phones are simply a fashion accessory. The thing that you notice as you pedal a fixie across Los Santos is that everyone has one. You see generally ambitious people snapping photos, calling emergency services on you for waving your gun, or huddled in groups, blankly squinting at their Badgers. You see your auntie jabbering on a bluetooth headset. Pull out your own and it seems to be lacking in features. There is no video capture option. No music app. No tongue-in-cheek spoofs of social games like Candy Crush Saga. (There is however a companion dog training app for your real-life phone, which is either sarcastically terrible or just terrible.) The cloud-save option seems busted, only quick-saving to your hard-drive.

As you spend some time with your iFruit, you’ll eventually find the myriad ways Rockstar has lampooned tech-loving society. The first takeaway is that people nowadays lead busy lives, with little patience for idle chat. No one in the game picks up when you call, be it your personal trainer, daughter, or shrink. The real purpose of your phone is to relay new missions via incoming messages from your partners in crime, but it’s hard to pay attention while racing from the law in a stolen status symbol. Our own Jon Irwin compared it to the troubled townsfolk in classic role-playing games, who pace around and point you on your next quest, but it’s not even that. That had community. This is a navigation tool for self-centered, highly-motivated ugly Americans.

The most blatant ridicule in the game is located on the game’s mock internet, which is accessed through the internet app on your phone. Poke around and you will discover elaborate jokes that take jabs at everything from Chipotle, to online hentai emporiums (“It’s culture not perversion!”), to Scientology, to America’s Got Talent judges. And how could you ignore the recent Bleets, which welcomes you “to the world of self aggrandizing shorthand?” At first it’s hard to take seriously any attempt at irony that employs a pointer cursor that is giving the middle finger. But then you realize that it’s actually flipping you off, along with everyone else who paid sixty dollars for this game.

The real draw of the fake internet, however, are the fake stock markets, the Liberty City National and the BAWSAQ. Here, players invest their in-game fortunes on fictitious companies whose values fluctuate like Blaine County’s weather cycle. It was thought initially that the game’s market economy was affected by players buying and selling shares. However, when a bunch of opportunistic e-traders banned together to crash the market in their favor, their hunch turned out to be a facade. The scheme backfired, leaving them all broke. Could there ever be a more disastrous reenactment of the financial crisis of 2008, and with just desserts?

It’s more of a funhouse mirror style of satire

The smartness of GTA has always been in how it persuades fun-seeking adults or youth to be accomplices in heinous acts. It’s brilliant antagonism wrapped in a fun game wrapped in a place that’s a little too close to home. In GTA5, this is taken to another level with Rockstar Games Social Club, where every photograph snapped with your (in-game) phone’s camera is uploaded to the website (in real-life). As expected, the vast majority of these shots are of stripteases and up-skirts and luxury sports cars. We’ve already touched on the selfies.

You could make a case that the studio is being hypocritical—providing a phone with an inward-facing lens for you to photograph yourself, and then arranging them in a photo book that makes you out as a greedy, chauvinistic ass. Just maybe that’s the point.