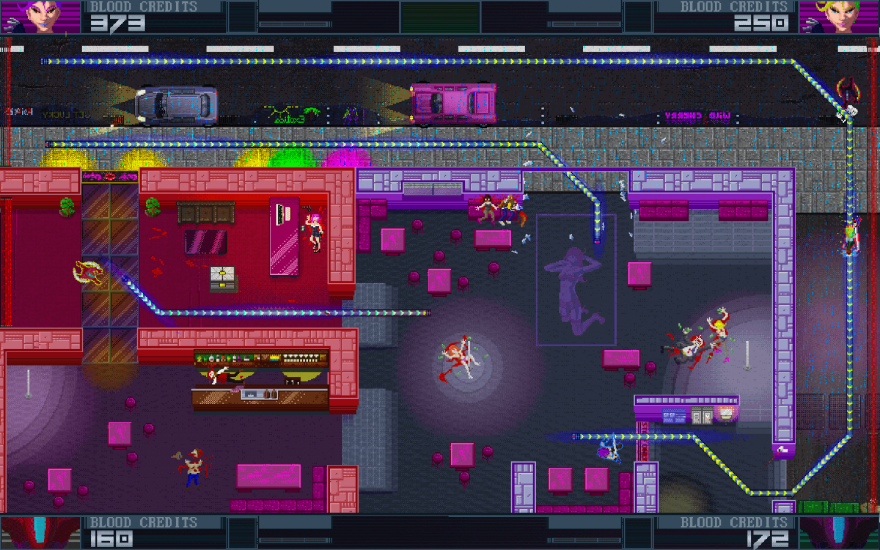 What should you do when mega-corporations control everything? If you look to movies, books and television for ideas, you should stand up and fight. Start a revolution or join an already existing one. But the citizens of upcoming top-down, multiplayer action game Gunkantana have lost hope. Instead of fighting back, they’ve set up death arenas in places like strip-clubs where they brutally kill each other for sport. It’s a cyberpunk future filled with bloody swords, laser guns, and rails on which to grind.

“Two years ago, the Loading Bar, a videogame-infused pub, hosted the Multiclash event, dedicated exclusively to local multiplayer games from local indie devs,” says Geraldo Nascimento, creator of Gunkatana and founder of Torn Page Games. “I was playing around with Unity in my free time and I thought it would be great if I could quickly prototype something to showcase at the event.”

Nascimento had recently seen the Hotline Miami 2 (2015) trailer and wanted to make a game that was as bloody and action-packed as that trailer. But the idea to make a top-down 2D action game had been in Nascimento’s head for years. And the cyberpunk aesthetic was something that Nascimento had been interested ever since playing the point-and-click DOS game DreamWeb (1994). But it was influence from The Matrix (1999), specifically it’s wall-running, that would end up adding the game’s unique feature—speed rails.

The speed rails are laid out in each level in a way that allows you to move around the space quickly. These rails don’t just add speed to the game, they also give you more options to attack and escape. To use the speed rails you simply pull the left trigger and your cyberpunk samurai begins grinding. While grinding you can attack other players; these moments are when the speed of Gunkatana is at its highest. And Gunkatana is at its best when it’s going turbo-fast.

Gunkatana isn’t finished yet, but its alpha demo has seen over 2,000 downloads already. Riding on the rails of this enthusiasm, Torn Page Games is looking to take Gunkatana to Steam, but before then a crowdfunding campaign on Kickstarter, which launched yesterday, is necessary to help finish it.

Nascimento says the Kickstarter funds will be used to add new modes like a story-driven campaign. He also hopes the Kickstarter will allow them to reach more people around the globe. “[We want] to get in touch with the global community, to expand our reach and let people know: Gunkatana IS COMING FOR YOU.”

If the crowdfunding is successful, Nascimento says “new moves beyond lasers and swords,” will be added. “There’s also a long list of powerups we want to implement, from different weapons to armor so the game isn’t just one-hit kills,” he said. He also has plans to expand the speed rails to “include tricks, smoother experience, [and] racking in points.”

Gunkatana is coming to PC, Mac and Linux sometime later this year. It could come to consoles if the crowdfunding creates a budget for it. You can support Gunkatana on Kickstarter and download its alpha demo on itch.io.