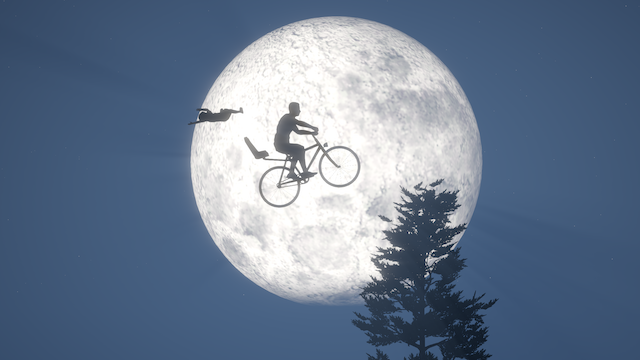 If you mixed MTV’s Jackass series with Bob Guccione’s Caligula (1980) film, and sprinkled a healthy dose of Super Meat Boy (2010) on top, there’s a good chance the result may be developer HakJak’s upcoming game Guts and Glory.

Recently launched on Kickstarter, Guts and Glory asks its players to do one thing: race to the finish line while “everything tries to kill you.” Giving you control of such characters as a father bicycling with his toddler or a family out in a car, traps such as guns, saws, ramps, and run-of-the-mill crashes stand in the way of success. If it sounds a lot like Happy Wheels (2010) then, yes, you aren’t wrong—this is essentially a 3D version of Happy Wheels.

HakJak is currently looking to raise $30,000 USD via its crowdfunding campaign. At the time of writing, it has already secured over $14,000 with just under two weeks to go. While the game has already been confirmed for PlayStation 4 and Xbox One, and has a host of confirmed features, the creator is looking for additional funding to help it add things such as a level editor, more characters and levels, and more “extreme” gore settings—not that it’s currently lacking in the latter by any means.


Additionally, if the game continues to receive support, HakJak has expressed interest in adding features such as a 3D platformer-esque game mode, a deathmatch arena, and bus/taxi game mode where characters must pick up passengers and deliver them to their destinations with as little bloodshed as possible.

To give Guts and Glory a go, click here to try out its current alpha. HakJak plans to release an the game via Steam’s Early Access program in Spring of next year. The game’s Kickstarter campaign will last until October 16.

You can keep up with Guts and Glory by liking the game on Facebook or following HakJak on Twitter.