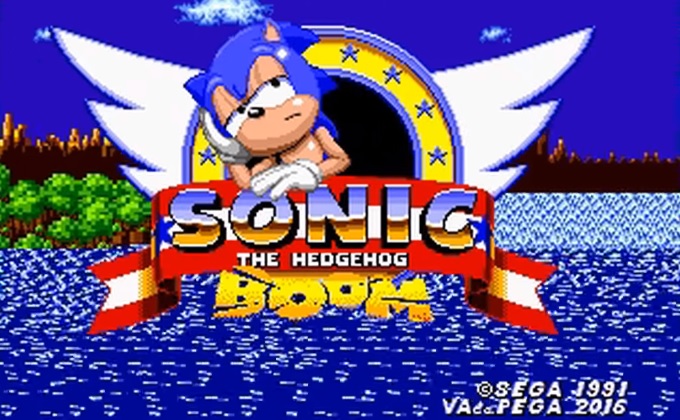 For the uninitiated, there are two things that Sonic the Hedgehog loves above all else: running really fast and collecting rings. The latter is such an integral part of the anthropomorphic blue hedgehog’s life that without just one, by simply touching him, he’ll die. This love affair is the primary subject of a new take on the original Sonic the Hedgehog (1991).

Using a process called ROM hacking, allowing for the alteration of a game’s graphics, levels, musics and, in this case, dialogue, hacker Victor “VAdaPEGA” Araújo has combined Sonic the Hedgehog with the game Sonic Boom: Rise of Lyric (2014). The former of which is one of the most influential and famous videogames of all time, successfully cementing Sonic as a cultural icon. The latter of which is notorious for being extremely bad and one of the worst selling games in the series’ 25 year history. The amalgamation of the two, appropriately named Sonic the Hedgehog Boom (2016), is something of a vinegar-flavored cake.

Araújo told me he got involved with ROM hacking in 2010 as a way to pass time during school, creating a couple of “awful” Mario hacks. “When I moved onto the Sonic hacks,” he explained, “things got a lot easier since everything has in-depth documentation of how to change practically anything, practically anyone can take it and turn it into their own Sonic hack.”

The biggest addition to Sonic the Hedgehog in Araújo’s ROM hack is dialogue ripped straight from Rise of Lyric, largely about collecting rings. As Sonic runs through each level, he shouts quips such as “It’s like they’re drawn to me!” And “You can never have too many rings!” Which, for Sonic, is probably true. Uploaded by the YouTube channel Razor & Zenon, a channel dedicated to hacked Sonic games, Araújo’s video is a 30-minute walkthrough of the entirety of Sonic the Hedgehog Boom. It’s fairly humorous, and largely maddening, listening to Sonic talk about rings ad nauseam.

Araújo explained there is a large community around Sonic hacks. Two communities he frequents are Sonic Retro and Sonic Stuff Research Group. “There are projects in the community with really impressive achievements, so please check them out,” he said.

Never expecting his hacks to receive this much attention, Araújo doesn’t have a lot of his work easily accessible for any interested. But a few videos can be found at his personal YouTube channel, including more Sonic hacks, as well as hacks of games such as The Binding of Isaac (2011) and Mario 64 (1996).