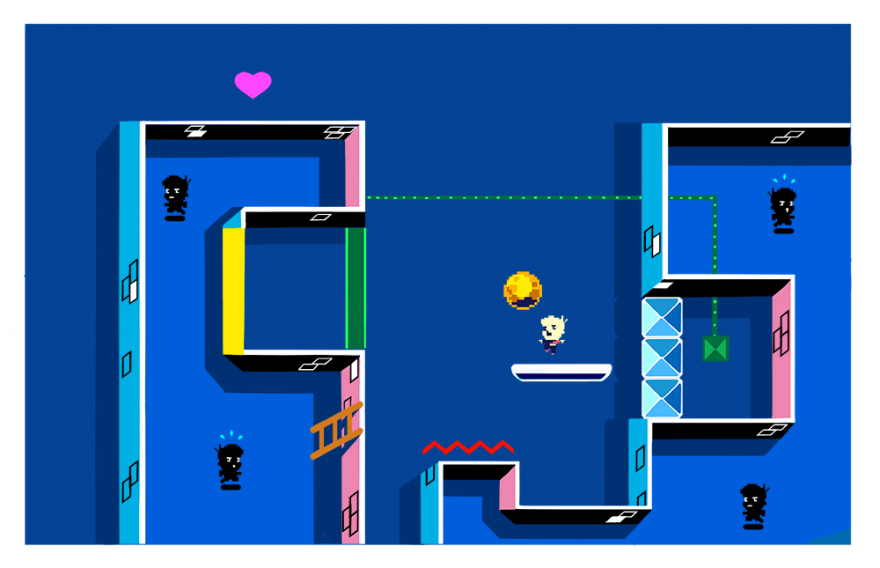 HackyZack is a “shitty metaphor” for creator Zack Bell’s thoughts and feelings on his own past. (“Shitty metaphor” is his phrasing, by the way.) It takes a Super Meat Boy (2010) approach to platforming—its meaning abstracted and then scattered among undeniably crisp platforming challenges. But where it differentiates from other platformers is in its multitasking. In HackyZack, players have to bounce around a plethora of obstacles all while maneuvering different balls to a goalpost.

So let’s get to it: HackyZack is about living with social anxiety—trying to escape its grasp by imprinting it onto a person or object that simulates comfort and security. For HackyZack’s little sprite, the balls are the only way to “win and survive.” Though like the people we cling to for comfort—whether it’s unhealthy or not—the balls are never things the player can directly control.  These themes started to emerge organically once Bell started developing the game. “When I analyzed all of the mechanics, the settings, and the mood, I could easily pick out parallels between the game and my past,” he said. Now, most of the mechanics—and not only the balls—are tied to the underlying narrative.

“I could easily pick out parallels between the game and my past.”

“For example, the theme of World 4 is expectations. The portals in that area represent pushing unrealistic expectations on your partner; often feeling like you need to be in two places at once,” Bell said. “World 5 is about manipulation. This is where we introduce the Voodoo Ball, and when kicked, it has an identical effect on all other balls on screen.”

Those only interested in the surface-level challenge of Bell’s precision puzzle platformer won’t feel bogged down by the personal themes, though. The personal elements of HackyZack were originally just for him: “It’s something that I’ve been holding on to,” Bell added. In a way, the game represents a way for Bell to put closure to his past.

Bell ultimately wants folks to have fun with the game, and if that means digging deeper to explore Bell’s personal relationships and social anxiety, then it’ll be there to explore. Those looking for answers will find them. On the other hand, those unconcerned with any concealed theme likely won’t notice any darker meaning. “The game will be fun and stand on its own, without the psychological undertones,” Bell added.