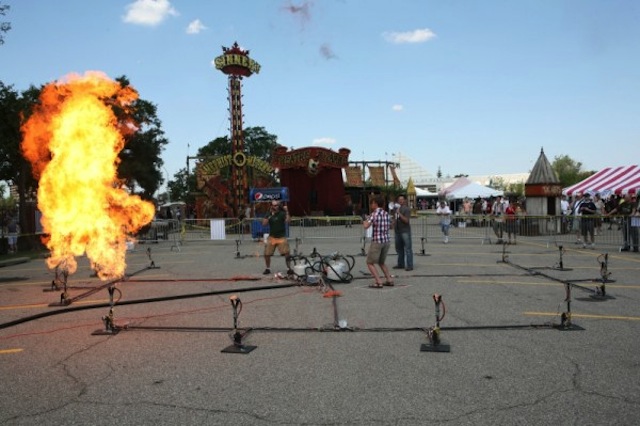 “Fight fire with fire!” shouts the MC, a Burning Man trench-coat-clown barking into a megaphone. “Two enter, one exits victorious, the other one’s toast!”

Tonight, Toronto’s Amsterdam Brewery is home to 32 pilot lights and an excited crowd standing on a yard of soily mud. This is Super Street Fire, constructed by the tech coop Site 3, and it’s a fire-spewing arcade homage. There’s a grid of pipes and hissing exhaust boxes, networks of wires coiled about. It looks like an extravagant ghost trap. Patrons get nervous as a police cruiser pulls into the lot. Project lead Seth Hardy darts towards the cruiser. He isn’t worried.

Cops interrupted an integration test in Scarborough and it wasn’t a problem; they just had some questions. Hardy explained that, by using two sets of red fighting gloves, motion detectors will trigger fire patterns to burst up into the sky. The officer wanted to clarify that he was making Street Fighter’s Ryu’s signature Hadouken pose.

“Yes,” replied Hardy, “that’s exactly what this is.” Asked if he ever played Street Fighter II, the officer replied that, yes, he loved that game.

“That’s the first thing that everybody seems to think of,” Hardy says. “Hadoukens.” That’s why the pyrotechnic installation game’s direction became very obvious, very fast. From these embers came Super Street Fire, an exercise for programmers to get some heat on their face, raver/pyros to play-fight and gamers to get some unique exercise. It’s more than just Wiimote waving, or the rumble of an arcade racer seat. It’s a fire fight.

Tonight, the police were only dropping someone off. Having filed the proper permits, Site 3 is cleared for all flaming mayhem. Just in case, Seth reduced the torches to blow only half as high as they will at Burning Man, a key destination for the game. Tonight is a fundraiser and field test. It isn’t the finished product, and there will be hiccups. Even without the flame volume, there is a volume of people, a few hanging by the safety gates of the installation, most by the drinking barrier, and some on the brewery’s second floor, where a DJ plays. It’s a bit science and a bit dark rave. It’s all a bit nerdy.

Site 3 was founded in 2010 by builders and hackers who wanted a tinkering space. Members have access to tools like saw presses, laser cutters and a 3D printer. Hardy, an original member, works in computer security. With pyrotechnics, Hardy found a tactile hobby. “Everything I do in my day job is intangible,” says Hardy, “after seeing some LED lighting and fire installations I wanted to get into electronics and learn how to do that.” Hardy knew enough about interface control systems to trigger ignition beyond button pushing. The outer-ring of Super Street Fire, 16 torches, is adapted from an earlier installation, Flux & Fire, in which users controlled fire through dancing. Before Super Street Fire, Hardy was underway on a pyrokinetic device, controlling fire effects through brain activity. For Hardy, there is pride in the challenge. “Anyone can build a flamethrower,” he says.

Daytime storms delay setup. To keep people smiling, crew members show the audience an Android tablet which acts as master control for all tof he effects. Kate, a tech, tells me that “everyone chooses ‘Eruption,’” which ignites all 32 torches. Momentum slouches when one of the plumes lingers. Site hands gather around, inspecting wiring and tapping the valves. Complaints are scarce. In a video game, glitches are a grievance or even charming. In this game, a glitch could have severe consequences.

Another repercussion of the rain is the exclusion of the DJ’s stage, a wooden set that recreates Ryu’s level: two ramps for the players and a bandstand for the MC, decorated with angled pagoda tiles and a zen insignia.

Finally, the first two players are called to the circle. One of the contenders is a game developer, Miguel Sternberg, the creator of They Bleed Pixels. Both combatants slip on their teched-up gloves, circling with their fists to see what happens. There are a few kinks in the system. Both players have a lazy glove. The health bars that were part of the DJ stand are missing, so they’re fighting blind.

A Hadouken triggers all 32 flames, on top of a recognizable sound bite. Sternberg and his opponent trade blasts. Eventually, Sternberg is named winner. He’s baffled, but satisfied. “I had no idea what was going on,” says Sternberg, “but the flames were awesome.”