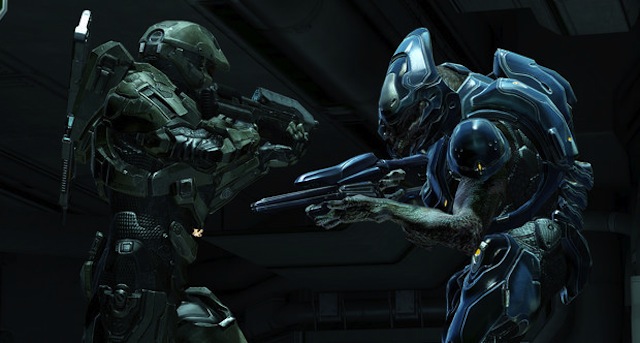 Before I start I should say that I’m almost a completely blank slate when it comes to Halo. Before I sat down with Halo 4, my experience with the franchise was limited to a handful of times in college when I was instantly vaporized by friends who possessed seemingly occult powers over the game. Joe wondered how such a neophyte might fare with this late edition to the series, and I’m here to report, pretty well, I think.

I found the first few levels I played entertaining once I figured out the basic rules of the game universe (eg, you can’t open doors, push buttons, or operate computer terminals by shooting at them, and in fact this wastes valuable ammunition). By level two I’d developed a strategy of running up to the aliens and punching them in the face that I found pretty effective, though maybe somebody with better aim would find it limited. Which, by the way, what is up with that punch? Why do my grenades pack all the firepower of a spitball but my fists crumple armor?

The plot seemed adequate. As far as I can tell this isn’t a story driven game, or at least it gives you the option of not engaging deeply with the story if you don’t want to. Master Chief doesn’t seem like a super reflective guy. Not dumb, just the kind of guy who wakes up and finds himself on a decrepit spaceship full of aliens and just thinks, hey, guess I’d better start killing some aliens. He’s not bothered with big questions, so neither was I.

I felt like I was either being dragged along by Cortana or reprimanded for not going faster.

In fact Chief’s motivation seems to be outsourced to his sexy tinkerbell personal assistant, who is constantly hectoring him/you to run places, find switches, and unjam doors. Did that stress you out? It stressed me out a little. In fact there was an undercurrent of low-level anxiety throughout the game that I found slightly unpleasant, and I think Cortana is partly to blame. (I’m also open to the idea that the culprit is my unfamiliarity with the controls, which occasionally landed me in claustrophobic corners, wheeling wildly and firing into the air.)

I kept thinking about my all-time favorite shooter, Half Life, which has no such third-party guide on your shoulder giving you directions. That hands-off approach, as much as the creepy dripping and flickering lights, made Half Life as scary as it was; you feel like you’re on your own, and when something happens, it’s genuinely surprising. With Halo, I felt like I was either being dragged along by Cortana or reprimanded for not going faster. It was less the good sort of anxiety-dread and more like the anxiety-stress you get when you have a bunch of errands that keep getting more complicated than they have any right to be. Seriously, how did a race of aliens with such a dismal record of designing doors that don’t jam ever get off their planet? And who thought that resetting your computer ought to involve half a dozen retractable bridges on totally different parts of the spaceship? When you have someone telling you what to do and pestering you to do it fast, these aren’t puzzles, they’re chores.

So, did you, Halo veterans, find the game stressful? I wonder if maybe I was playing it wrong. I got the sense, especially when driving the vehicles, that maybe the game is designed to create a sense kinetic flow, and all Cortana’s whipcracking is meant to speed you along, and that I was resisting by trying to play cautiously and methodically. To ask a work-shoppy question, what does Halo want you to feel?