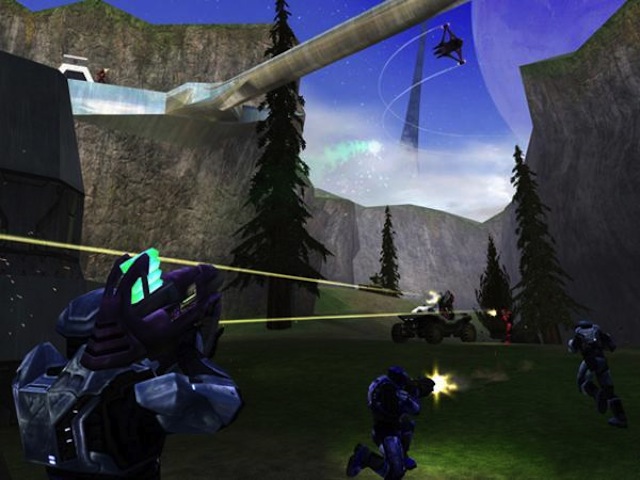 Welcome pilgram—or, rather, Spartan—to Halo, a world that has changed shockingly after 11 titles. You bring up some great questions about choice and lack thereof, which I’ll get to in a moment, but first I gotta disagree with you about the stress Halo 4 induced. I felt none. I’d go so far as to say this game wrapped me like a warm blanket, and made me truly nostalgic for some halcyon days second semester senior year of high school. The first Halo had just dropped, and so many hours were wasted fragging my classmates that I nearly failed calculus. I regret not a single glorious moment.

I don’t think I’ve felt quite as powerful a pull towards any videogame—or been quite as bowled over by a game’s subtly perfect mechanics and clever constraints—since. That was 10 years ago, an epoch in video game history, which is a problem. I loved Halo 4 because it reminded me of my youth. But I have grown; this franchise has not (OK, maybe in sheer numbers it has, with all the books, the add ons, the ginormous online community, but it has not matured). Is that a problem?

Halo has, I think, become a victim of its own success.

I think it is. And I know that Joe agrees with me. Some readers took issue with his critique of all aspects of the game except the gameplay, but they seemed to be comparing this latest Halo against the other Halos. The Halo universe may be large, but it is not all-encompassing. There are other video games out there, and other, more compelling, better shooters have come along. What makes those shooters better? I think we can all agree that it’s no longer adequate to shape a single player campaign around a really silly story (or, if it’s going to be silly, just go balls out; see: the storyline for every Modern Warfare game).

Josh, I love what you wrote about John (!!) Master Chief’s “outsourced motivation”—that’s exactly the problem. Halo has always been brilliant for its careful constraints vis-à-vis gunfire. It’ll go down in history as the game where pistols and punches were often the most effective tools on the battlefield. I’m hoping Jamin will share an amazing anecdote about how the designers endlessly fiddled with the length of time it took to reload different weapons. But Halo has, I think, become a victim of its own success. Now, as with so many shooters, the main event isn’t the campaign but the online multiplayer, and—to a lesser extent—the cooperative campaign. It’s playing with and against real humans that the real joyful moments in this game come through because, to answer a bunch of your questions, Josh, you’re no longer worried about what the hell it is that this game is trying to make you feel or do. Instead, you and your buddies are mounting a assault on the enemies left flank, and calculus, and everything else, can wait.

So, Jamin, were you as underwhlemed by the story? As confused by the characters’ motivations? As tired with the puzzles? Do you think Halo needs a radical update, or should it just keep doing what it does so well, nuance be dammed?

I do also hope you address some of Cortana’s cray-cray-ness, which I haven’t been able to bring myself to even begin to care about.

The Halo Club, Part 1: Cortana is going to give me a stroke.