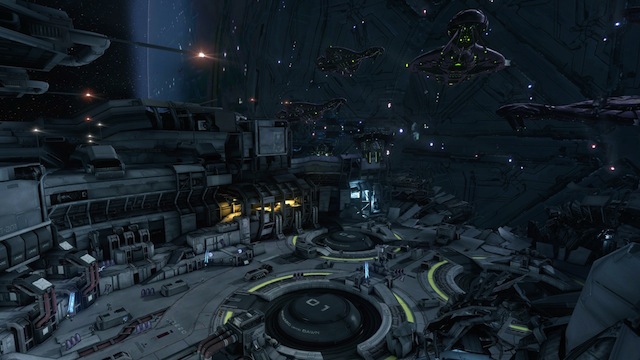 I am thoroughly disappointed by 343’s decision to do the one thing Halo needed to do to win my respect. I am, of course, talking about putting actual clothing on Cortana. But I digress.

I play a lot of video games. Halo? Not so much. This inadequacy always seemed like a curious omission (we all have them) but playing through the start of Halo 4‘s campaign reminds me why. For beginners, it is a given that you will have no idea what is going on. 343 doesn’t even give you the perfunctory “previously on” that starts most television shows. So when Cortana, your AI guide, starts talking about her pending deterioration through rampancy (whaaaaa) and why Chief needs to get her home, you are supposed to care because you have been playing the franchise from the start. This was not the case for me, so the revelation fell a bit flat. No matter.

My initial impulse was annoyance as I am a story fellow through and through. If you are a game designer and decide to give your title a narrative overlay, then I should care about it. I do not care about Master Chief and after my cloud saved game failed to make it to the Cary, North Carolina hotel room where I am currently writing, I was forced to play through the first two hours all over again. I realized that I had not really being paying attention to anything any character had been saying, really didn’t understand where I was going, or why I should care.

Josh — maybe it’s the handholding that I find so unnecessary. It is not ironic that the game opens with the idea that “children are the most susceptible to indoctrination” in the words of Master Chief’s biochemical architect who designed him. Perhaps 343 is telling us the same thing? We’re at our most vulnerable when we’re learning to play something new so perhaps beating us over the head with “this is important” is the best (read: only?) way to make you care.

Yet I’m finding Halo 4 massively enjoyable if only because the plot was so meaningless that it couldn’t even count as a distraction. This is not always the case — games sometimes stumble upon a glimpse of narrative brilliance only to bungle it in subsequent acts. But Halo 4 is the purest of the shooter archetypes so little details like a giant unknown planet that scans you from afar or the apparently broken agreement between mankind and the Covenant just washes over you.

I wonder if the juxtaposition between Halo 4‘s day one sales and the waning influence of the traditional retail console market is a sign. Michael Abbott suggested as much by comparing the shooter’s popularity with the two-decade run of the Western and I’m apt to agree with him. The fact that the enjoyment between my first experiences with Halo and its most recent iteration is a sign of a real flattening of the shooter genre — there’s little new space to be explored in its current form. This is not a bad thing (and certainly continues to be lucrative) but does not bode well for any studio in the FPS genre delivering something even the slightest bit also-ran.

That said, Ryan, I think Halo should stay the course. They’re moving into the predictable James Bond/Batman territory and we now have something of an archetype. Remember it’s movies like Skyfall and comics like The Dark Knight that take all the accreted character and nostalgia and turn that fodder in something terrifyingly unique. Halo 4 isn’t that game but that doesn’t mean Halo 7 or 8 won’t be.