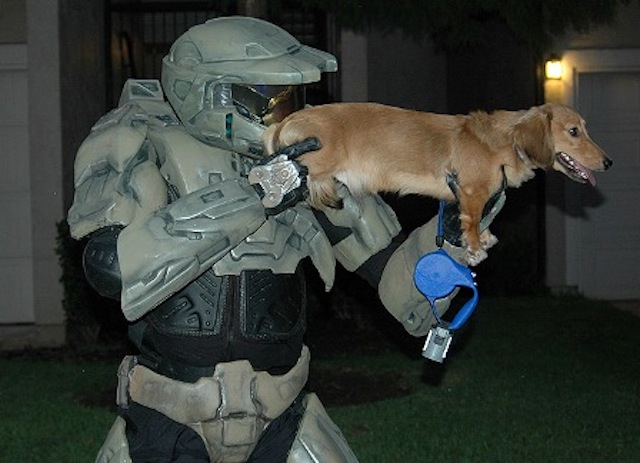 I like the idea of Halo becoming a Batman/Bond-style franchise, and I can certainly understand the appeal that has for 343, but I just don’t know that Master Chief John was built to last. So much of the fun in Bond & co comes from watching new actors and directors inhabit a character whose basic outline and origin myth you broadly already know: debonair, cynical, slightly sociopathic orphan spy; rich, righteous, slightly goth orphan superhero. These characters are crudely drawn, and that’s fine. Part of the reason the franchises can last so long is that they have these sturdy, comfortingly familiar archetypes at their core that can survive repeated reboots and injections of novelty. But with Master Chief you don’t even get that basic character sketch. The dude is a total cypher. I mean, we don’t even know for sure-for sure that he has a face.

I’m not saying I want to hear more about John’s childhood. I have doubts about how much character development you can do before the plot gets larded down and the player starts to say, Hey, that’s not me. The best characters, for me anyway, tend to basic and archetypal: a surprisingly tough scientist who’s been dicked over and wants to escape the lab alive, an amoral criminal willing to do anything to get rich. They’re extremely simple and totally in the service of propelling the plot. If Cortana always has to tell you where to go, it means John lacks even that basic purpose.

But maybe it doesn’t matter. Maybe 343 can fiddle with the gameplay in ways that, if not quite a Wild Bunch genre reinvention, is at least enough of a Sean Connery to Roger Moore franchise alteration to keep fans interested. If not in the character or the story, was there anything in the gameplay of Halo 4 that felt new or different? Was there ever a point where the designers seemed to be nodding to past versions and maybe toying with your expectations a bit? Were you ever surprised?