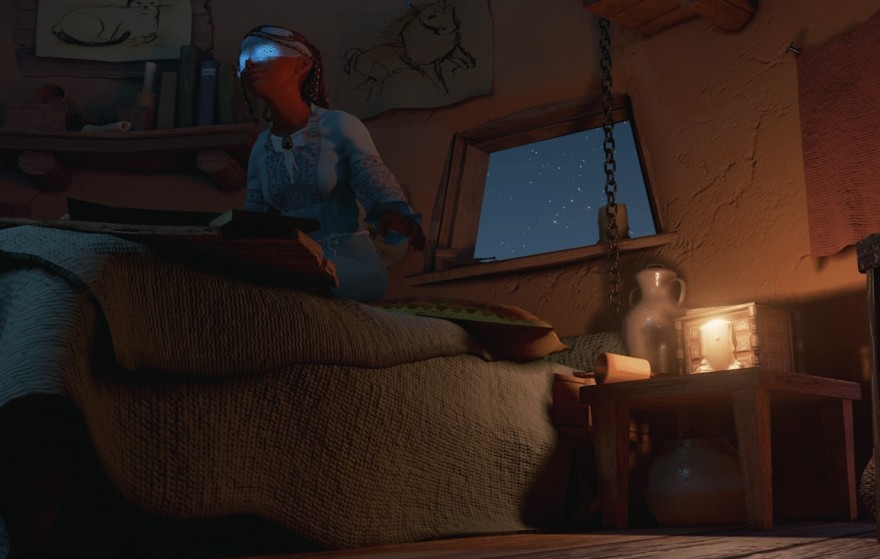 “It needs to be ancient, epic, and mysterious.” These were Marty O’Donnell’s only instructions from Joseph Staten, who’d asked him to write the music that would accompany Halo’s (2001) unveiling at Macworld four days later on July 21, 1999. The melody that resulted from Staten’s minimalist direction, and O’Donnell’s clever use of Gregorian chant, has since become synonymous with the Halo franchise. Rolling Stone named the score for Halo: Combat Evolved the Best Original Soundtrack of 2001. Then, in May 2005, BusinessWeek reported that the first volume of the soundtrack for its sequel, Halo 2 (2004), had sold upwards of 90,000 copies and landed at number 162 on the Billboard 200 chart, something no videogame soundtrack had ever done before.

Today, Highwire Games, the Seattle studio O’Donnell co-founded in 2015 with several other industry veterans, aim to bring his tradition of cutting-edge music and sound into the realm of virtual reality. Their debut title is a first-person PlayStation VR exclusive called Golem, announced at last year’s PlayStation Experience keynote.

Although Golem has no release date at the time of writing, Highwire is currently raising funds on Kickstarter for a “musical prequel” to the project called Echoes of the First Dreamer. A stand-alone album “meant to be a musical journey that tells the story of the world of Golem,” Echoes will be released digitally to backers before the launch of the game, with CD and vinyl pressings also available. The compositions heard in the campaign video meld gentle piano melodies with orchestral strings in a way that’s at once familiar and entirely new—recalling, at times, the intimate soundscapes of Halo 3: ODST (2009).

As for the virtual reality experience of the upcoming game itself? “The biggest leap forward from a tech standpoint is 3D audio,” O’Donnell says. “We’re already working with Unreal 4 and Wwise to use [binaural audio technology] in the headphones in order to place all the sounds in a three-dimensional space around your head.”

“the music will reflect an intimate, less bombastic approach”

And further breakthroughs are being made in spatial audio at this very moment. One pioneer in the field, Professor Edgar Y. Choueiri at Princeton University, has “actually developed filters that can create 3D audio from two speakers—without the use of headphones,” according to O’Donnell. “I’m not sure if his technology will be ready for the launch of PS VR, but it’s been fascinating for me to work with him and hear the amazing results. It’s possible that I’ll be able to utilize this even on the music recording for Echoes of the First Dreamer. We’ll see.”

While he’s hesitant to “oversell” PlayStation’s VR, O’Donnell explains that “there really is nothing like it currently on the market. Once you put on the head-mounted display, you are visually transported to another place. Your brain really starts to believe that [what you’re] seeing is reality. Once you add the full 360-degree audio field to the visuals it’s almost impossible to realize that you aren’t actually there. I found myself trying to lean on a stone parapet that our artists had created even though I knew that I was still sitting on a chair in my studio. When you take over a golem in our game, you really start to feel like you are controlling its movements and you are seeing through its eyes. When you swing the sword or shine the magic flashlight, because you’re holding a Move controller, it feels completely natural and needs no explanation.”

Golem’s story begins with the player character injured and confined to her bed. “You’ll need to learn and master the ability to create and control golems so you can explore and restore order to your world,” says O’Donnell. “When you are controlling a doll, bugs will seem like a huge threat—and when you’re controlling a 20-foot-tall stone giant, you’ll swing a huge sword and fight giant, evil golems.” However, players coming to the game hoping for combat in the vein of something like Halo or Destiny will be met with disappointment. Though the majority of Highwire’s employees previously worked on blockbuster titles at studios like Bungie, 343 Industries, and Valve, this is a new direction for the team. The music on Echoes of the First Dreamer, and within the virtual game world, will reinforce that.

“Since the story of Golem is smaller and more personal than some of the previous stories we’ve told,” O’Donnell says, “the music will reflect an intimate, less bombastic approach. We’re not flying around the galaxy saving mankind—we’re playing as an injured child who wants to help save the family from a malevolent magical force.”

O’Donnell is the 2015 recipient of the Game Audio Network Guild’s Lifetime Achievement Award. His album Echoes of the First Dreamer will only be released if it reaches its funding goal by Tuesday, April 12. Check out the Kickstarter and reserve your copy here.