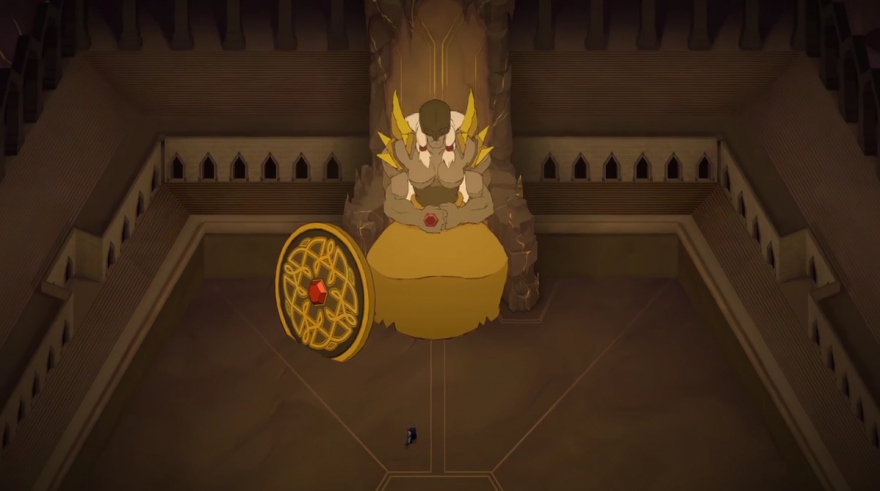 My nephew’s name is Eyvand, which, according to his father, means “happy warrior” in old Norwegian. He is certainly cheery, and slaughters his plastic drum set with glee, but the idea of a jolly fighter feels contradictory. So many heroes are grim, miserable codgers bemoaning their fate. I mention my nephew to William Dubé of Thunder Lotus Games after getting crushed by a frost giant in a demo of the upcoming Jotun, to which William says the “happy warrior” makes perfect sense in Norse mythology: “Viking warriors are happiest on the battlefield.”

Death through honorable combat is how one gets invited to the feast at Valhalla, but it’s not some sad county fair. That feast is celestial in scale, and it is the celestial that Jotun is aiming to capture. The entirety of the game is hand-drawn in 2D, snaring some of that old Disney magic along the lines of The Black Cauldron or The Sword in the Stone. The two bosses of the beta version lumber and heave, the environment looms around you, and each animated frame is ensconced by the elements you’re traversing.

As Thora, you are a warrior who has died with shame, and you must hack your way through Norse purgatory to get back in the good graces of the gods. She is probably not pleased to have been denied entry into Valhalla, but battle is her wheelhouse. She’s got the muscle, heavy armor, and axe to take down these various monsters, though this means she isn’t exactly a gazelle on her feet. There’s a solid weight to controlling her; it’s vital to plan your bumblebee floats ahead of time. Tactical use of your strength is the best way to whittle down the various jotun, which are multi-storied giants who are imbued with the powers of the elements. The screen zooms in and out to craft the sense of magnitude, homing in on a foot when you are near and widening when the frost giant is ramping up to run you down.

the music tails you from a distance like a curious stray

Just as the borders of the frame swell and shrink according to the action going on, Jotun’s sonic mood stretches and swerves to complement Thora’s journey. The game’s composer, Max LL, brings his primary experience working in film to provide haunting orchestral arrangements that tail you from a distance like a curious stray. The music is a background character, accompanying you on what is primarily a lonely journey through the Void, and reacting to where you go and what you find in subtle, slippery ways. Max has been writing the music alongside the development of the game, building symphonic elements that flesh out the combat and exploration elements as you play. He’s arranging the music so it can shift in step with the ongoing battles, and in the beta, elements like the bass ebb and flow with subtle clues as you explore the ice.

Outside of the rampaging jotun, the story of Thora is notably missing in the beta and promises to be a focus of the final game. Jotun hopes to channel the power of epic animation and an enveloping score into a dungeon crawler with elemental colossi, and so far they’re hitting all the grand tempos and tones. The lonely search for redemption is presented without context in the beta, leaving one with a greater sense of punishing power of an eternity sentenced in purgatory. At release, Jotun promises to expand on the tale behind Thora’s trial, on a lush and unforgiving stage, with action that trades on the limited moves of a two-handed double-bladed axe. Thora must consider her swings, for a wasted slam leaves you open for seconds that feel like days, and the jotun do not twirl softly. A happy warrior seeking Valhalla would expect nothing less, and strikes with the slightest smirk on her face.