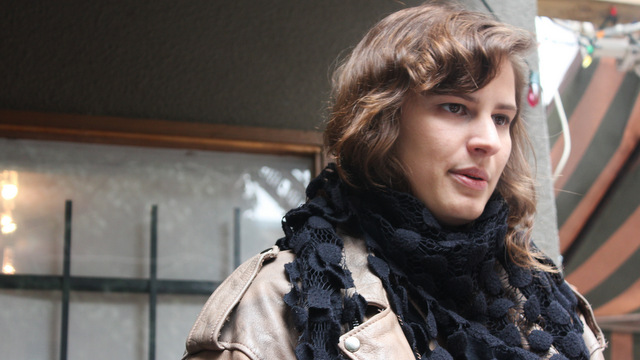 Hannah Epstein wants to get sued.

The Toronto artist’s latest work is a choose-your-own adventure implanted in YouTube annotations called Mc Mickey and Air Jordan’s Hyperspace Safari that reimagines the internet as a wasteland, “basically empty, but full of life.” The internet being what it is, this space is inhabited by memes, conspiracies and copyrighted material sneaking around e-cops, CISPAs and Bill-C11s. You can check your emails from undercover authorities, gamble on Google, sell your panties or i-dose binaural beats with a net wizard. You can also do these things in Hannah’s game.

“I have this mentality of envisioning digital as physical,” says Epstein, “that Safari and Firefox are mediums we have of navigating the internet, so you’re literally going on a safari, seeing all sorts of wild and crazy creatures.”

Your guides, a crudely scribbled mouse and a plane with ‘Air Jordan’ scrawled along it, are arrested near the outset for copyright violation, leaving you lost in the weird desert. Epstein’s uploads have yet to see the same fate, getting reported, removed, but if one segment did it would make completion harder, even impossible.

I originally met Epstein in the belly of a corporate beast. An industry mixer, surrounded by sponsors, suits, an open bar and artisan poutine cups topped with fried quail eggs. Epstein was invited to attend, a fact she kind of spits out.

“People who are sociopaths are doing the best in this gamified world of LinkedIn.”

Epstein had only recently been turned on to game design, previously pursuing a career in film. The philosophy of games had won her over. At this mixer, she decided to play her own, one that many overdressed attendees unconsciously play all the time.

“People who are sociopaths are doing the best in this gamified world of LinkedIn,” says Epstein. “That industry party could have been beneficial for me. I probably could have gotten a job out of it!” Though games are often seen as rules and structures, Epstein, raised in Nova Scotia by a left-wing family and a subscription to Adbusters, is spiteful of them in the real world.

One of the biggest, hypocritical offenders of rules, Epstein believes, is Disney. Studying folk lore in university, Epstein’s sore that Disney themselves built an empire on appropriated fairy tales. And then put copyrights on them. Epstein paid them forward by making their mouse the squeaky her own protagonist.

As user restrictions grow tighter, web laws get fuzzier, legislations like SOPA are narrowly dodged, CISPA and SOPA’s Canadian cousin Bill C-11 are passed, Hannah worries about freedoms on spaces like YouTube, which she described as utopic five years ago. Today, you could have your video pulled because a Dylan song played in the background of your daily whine.

“It’s very clear on the internet, especially in its main channels of information, Google, Facebook, whatever, there’s a push towards a crackdown on people using ‘pirated’ material online,” says Epstein.

Epstein admires musicians like Girl Talk and communities like YouTube Poop, which segments of Mc Mickey homage to. On the flipside, material from King of the Hill, To Catch a Predator and My Little Pony are sent through the artistic shredder.

YouTube isn’t the enemy to Epstein, sympathizing for the titanic web being. YouTube is her method for game making altogether. Despite being a game designer, something she makes her living off of, Hannah never got the hang of coding, content with YouTube’s annotations. “Everything is so drag-and-drop and user friendly,” says Epstein, “I feel like I only have to wait a few more years before I have the most perfect game making program, which I’m sure others will scoff at.”

Her last game, The Immoral Ms. Conduct, also deals with incarceration, though in a more traditional sense. Mc Mickey, which baits trouble, hasn’t found any, as nice as the publicity would be. Epstein’s hunch is YouTube hasn’t even noticed her.

I asked Emmanuel Evdemon, an entertainment lawyer vocal about laws lagging behind the sharing age if the pop anarchy of YouTube Poop is under any threat. “I have to give you a lawyer’s answer to this one,” says Evdemon, “it is possible, and it depends.

“Basically, under C-11, the use will depend greatly on the impact of the YouTube Poop video created, and on the qualification of the use… There will be many questions relating to what constitutes non-commercial use, whose use has to be considered, what type of effect is substantial, and does any adverse effect remove the new work from protection or does the net effect of the new work have to be substantially adverse?”

There are a lot of legal grey zones, like perceived negative effects to the original work, which hinge on viral x-factors like notoriety. The other big concern that’s suddenly thrust these videos outside of protection is YouTube’s payment scheme. Uploaders can now make cash off their hits, but at the cost of being responsible for pseudo-commercial work, even if it’s for pocket change and the ads that run before fellate the very thing users tear apart (though in my case the ads are for Myrtle Beach).

“The least harmful people to the industry are picked on, slammed down,” says Epstein. “The rules they are trying to say don’t apply to them but everyone, it’s just all these hierarchies and classism privileges which I am against. And I think any thinking person would also be against.” Hannah objected to my using of the word ‘appropriate,’ since it implies these materials were owned by anyone in the first place.

Hannah Epstein is currently working on PsXXYborg (above), commissioned by OCAD University and Feminists in Games. Based on Donna Haraway’s Cyborg Manifesto, the game, played simultaneously on an iPad and projected screen, is about virtually uploading your consciousness. It’s loaded with full motion videos (FMV), and Epstein would love an FMV revival, hoisting it away from Sega CD oddities like Night Trap. Whether it will also bait copyright calamity and bantam artistry is unsure, but I know where to place my bets.

“Any chance I have to pick on corporate entities, especially in the digital space with copyright issues,” assures Epstein, “I will.”