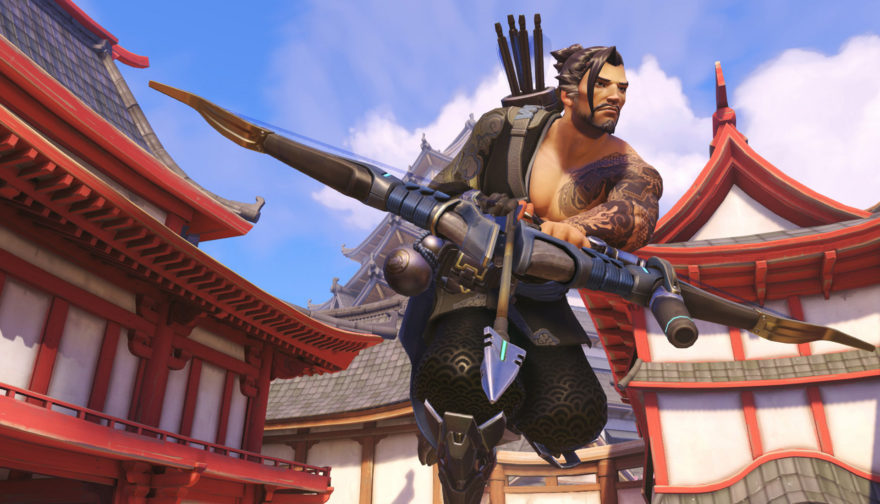 My ears perk up instantly. That’s Japanese. I look up from my phone. A flash of blue dragons narrowly misses a Widowmaker. My partner is hunched over, gripping the PS4 controller with an intensity that has me concerned for his carpal tunnel. The ragdoll body of Hanzo sprawled awkwardly on the ground is all that is left of the carnage. I lean closer to the television to get a better look at the shirtless, tattooed Japanese man running around wielding a bow and arrow.

He hands me the controller and I die instantly. We find out very quickly that this is going to be a recurring theme as I clumsily maneuver around Hanamura missing each and every single target. Turns out, Hanzo is incredibly hard to use. This was a giant bummer, as I liked being able to play as a broody-eyed Japanese character. But I brought shame to the Shimada clan in the process, and handed the controller back.

“Ryuu Ga Waga Teki Wo Kurau!” I pause the YouTube video and look expectantly over at my mom, who looks unamused. She knows I want her to translate what Hanzo is saying. The entire internet wants to know what Hanzo shouts before his Ultimate. “Ryuu means dragon,” she says. I nod. She pauses. “This is very good Japanese.” She’s impressed. “It is very proper … Ga Waga means our enemy. Teki Wo Kurau means … eat, or destroy … or kill.”

I ask her to hold on while I pull up images of Hanzo. She is confused, and looks mildly annoyed as she pauses the Japanese drama on her iPad. I show her a decent close-up of the ponytailed man, waiting for her opinion. Mom is quick to deliver:

“Why are you asking me to look at him?”

“He looks like he is going to kill the bad people.”

“Is this your internship stuff?”

“Where are the Japanese girls? I would want to play as that.”

Finally, I show her one last piece of Hanzo media. He’s holding an arrow up to his face before turning his head to look at the camera with low lids and a pouty expression. Mom is not charmed. “He doesn’t look Japanese though.” Shimada Hanzo failed to leave a lasting impression on Fujisawa-san, and that is all the confirmation I need. I will not play as my broody Japanese boy not because I’m terrible playing him, but because my mother does not approve.

Bastion – Bastion is the machine pointed at the world
Junkrat – I have fallen in love with Junkrat
Mei – Here comes Mei, the badass nerd hell-bent on revenge
Torbjörn – An ode to hard-working, salt-of-the-earth Torbjörn
Widowmaker – Widowmaker made a widow of me