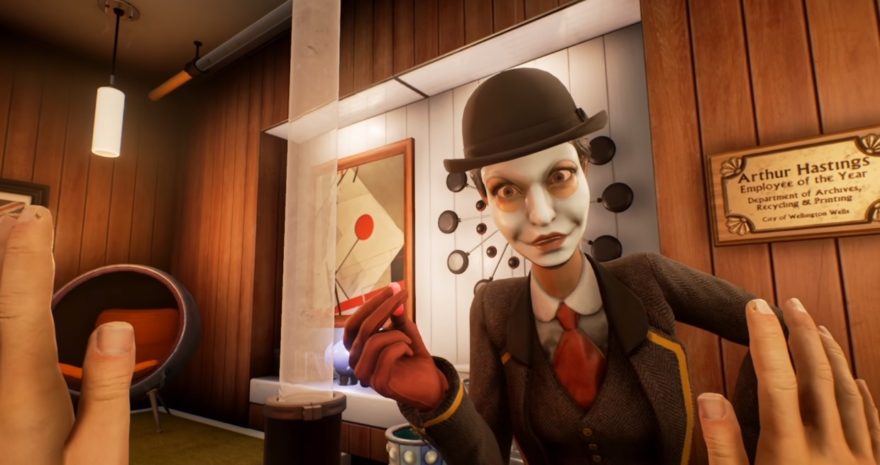 Among the many titles shown off as part of Microsoft’s press conference on Monday was We Happy Few by Compulsion Games. The demo opens with the player character looking up from a candy apple red microfiche reader and straight into a giant clock that reads FRI 9 OCT 64. Meanwhile, he is muttering in an English accent over what sounds like remembered screams and emergency announcements. All of this is to say very quickly that We Happy Few is set in a dystopian England with a strong Fallout-esque retro-future vibe. To top that off, I was delighted to learn that the specific fictional town in which the game takes place goes by the alarmingly twee name of Wellington Wells.

The sleek mid-century design, though—like the porcelain masks worn by Wellington Wells residents—is hiding something more sinister underneath: big slogans on walls say things like “Happy is the country that has no history” and “it’s never too late to have a happy past,” and the Kickstarter page vaguely hints that in order to survive the German Occupation of Britain during WWII, “the Wellies all had to do A Very Bad Thing.” As a result, much like in Aldous Huxley’s 1931 novel Brave New World, people in the world of We Happy Few are kept in line with a drug, in this case straightforwardly called Joy.

Joy plays an integral role in We Happy Few, and it serves as a regular reminder that without a chemical assistant, the player cannot fit into this society. The player’s main goal is to escape this society and never take Joy again—the way it meddles with emotions is sinister and hides darkness and brutality. But the decade that gave us Brave New World also brought such innovations to the treatment of mental illness as electroconvulsive therapy and the lobotomy, so it’s safe to say that our perspectives on mental heath have changed since then. According to the World Health Organization, we know that one in four people on Earth will be affected by mental illness at some point in their lives and two-thirds of people with mental illness never seek professional help.

“why don’t you just be happier”

It’s true that there’s a lot of societal pressure to show off only the happiest of emotions—we post our smiling group photos to Facebook, and there’s a solid chance I’ve heard the line “Oh my lord, he’s a downer,” in my actual life. A lot of the stigma towards mental health issues leads people to casually question its validity, or to leave out the mentally ill so they don’t have the chance to bum anyone else out—but for every “why don’t you just be happier” there’s usually a “don’t your meds make you feel like you’re not yourself?”

40 percent of Canadians between 6 and 79 take prescription drugs. In the US, it’s closer to 70 percent and these numbers are often presented with the argument that we’re an overmedicated society, whether because parents don’t know how to make kids behave or because drug companies can advertise directly to consumers. On the other hand, these prescriptions are supposed to represent doctors working with patients to figure out what drugs work best and in what quantities for their specific needs, and in her 2010 book We’ve Got Issues, Judith Warner argues that actually, on average, children are undermedicated in the US because of the inaccessibility of mental healthcare for poorer families.

This context means that a character being made to regularly take a drug to stabilize her mood can’t really be kept apart from our understanding of mental health. And for a game where the bad guys want you to have fun and not dig too deep, I hope that through engagement with its systems, We Happy Few presents the complicated issues it deals in with more than a milligram of nuance.

You can visit We Happy Few’s website for more info. It will be available through Microsoft Game Preview and Steam Early Access on July 26th.