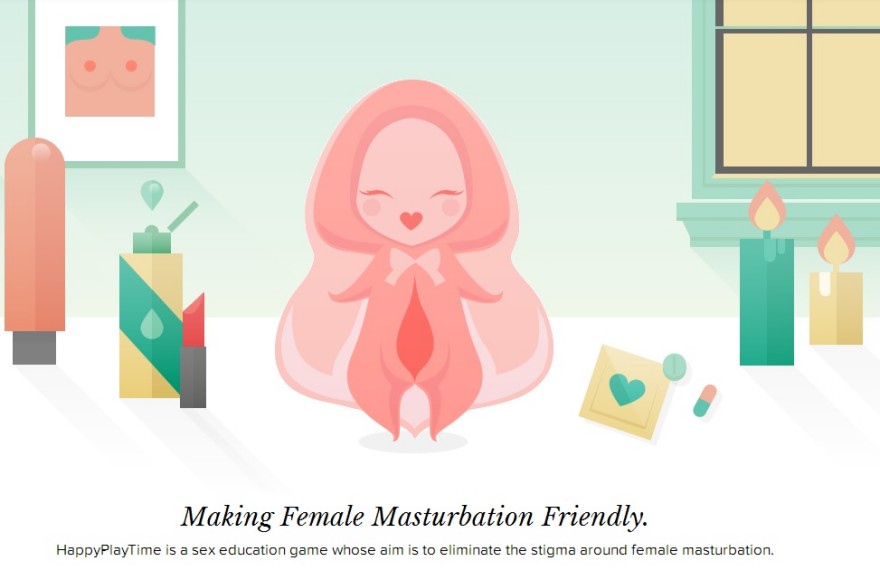 Yep, just take a look at HappyPlayTime. This is Tina’s upcoming mobile and web-based sex education game. It even has a cute mascot called Happy—she’s a talking cartoon vagina—that’ll guide you through its six mini-games.

Tina was told that the game had been rejected due to its “pornographic material.”

The problem, Tina reasons, is that there is a cultural stigma attached to female self-stimulation. As such, HappyPlayTime is a way to address the subject openly and in a lighthearted manner.

This is done by teaching the anatomy of the vagina through friendly illustrations and labels. Following this, the player is asked to interact with Happy by, for example, rubbing her clitoris slowly and gently.

Important to note is that there is no photographic nudity in HappyPlayTime, and the interactions verge on being abstract—arguably, it’s hardly any more sexually explicit than Tale of Tales’s Luxuria Superbia. Yet, upon submitting HappyPlayTime to Apple for it to consider for distribution on its App Store, Tina was told that the game had been rejected due to its “pornographic material”.

This caused some outcry, as expected, which was best summed up by advertising executive and MakeLoveNotPorn founder Cindy Gallop. She called Apple out on Twitter as it “lets men stare at tits” by accepting an app called Rack Stare, but “forbids women educating themselves” by rejecting HappyPlayTime for the App Store.

Fortunately, Apple doesn’t rule the world (yet), and so HappyPlayTime will be available as a web-based game and on Android for phones and tablets. It’s just a shame that the combination of videogames and sex is grounds for rejection still, while other “mature themes” like excessive violence is accepted without even a blink of an eye.