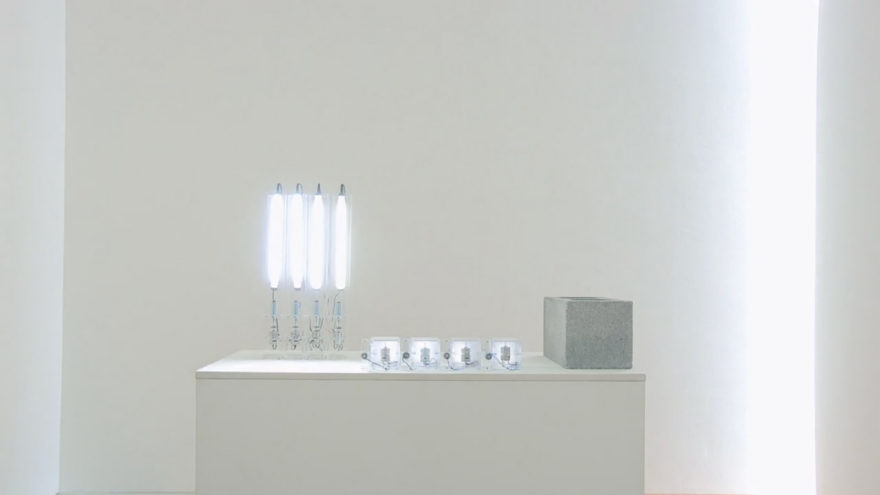 Brutalist architecture has gotten a bad rap over the years—so much so that Goldfinger, the villain of James Bond fame, was named after Ernő Goldfinger, an architect inspired by brutalism. Mo H. Zareei (aka mHz) is trying to fight back against this societal repulsion with his evocative sound sculptures. He’s an Iranian electronic musician, sound artist, and music technology researcher, who is actively finding ways to use his interests in both brutalist architecture and noise to show how nuanced and poetic these two concepts can really be.

In his series machine brut(e), Zareei makes use of three sound sculptures rasper, Mutor and rippler, to make unusual audiovisual combinations. Each piece is a marriage between sound art and sculptural composition, accompanied by a concrete block to visually highlight the ‘raw concrete’ material and its links to brutalism. Zareei breaks down the different elements of brualist aesthetics which are compelling to him, as he says, “The monolithic appearance, visibility of material, valuation of crude concrete, strict geometries, repetitive modules, lack of nonfunctional ornamentation, these were all fundamental principles by which I have constructed my sound-sculptures.”

Each piece is a marriage between sound art and sculptural composition

Zareei describes his childhood in Ekbatan, Tehran to Streaming Museum as growing up among “gray Lego-like giants,” and speaks of the town and “the poetry of its parallel lines and right angles, its strict geometries, homogeneous grayness, and the perfection of its zigzag… a gracious haven of order and coherence in an enormous city of haphazardness.” This background giving brutalist architecture an almost romantic sense undoubtedly affects Zareei’s work, and allows him to express a perspective deeply contrasted to Ian Fleming’s villainous portrayal, or the perceived mundanity and ugliness of the style.


Although the sound sculptures of this project may initially seem dull and monotonous, or even ugly and abrasive, if experienced in an open-minded and curious way, they can be incredibly and unexpectedly satisfying and poetic. Listening and watching Composition 0001 reminded me of tile floors and concrete, a turnstile moving with perfect flow. It also reminded me of oddly satisfying industrial processes (try to watch this muted, with Zareei’s work below, playing in the background to get a sense of what I mean). As highlighted by The Creators Project, “Zareei’s goal with the constant repetition is to create a “temporal monolithism” that matches brutalism’s block-like aesthetics. The repetition is also designed to produce an ‘instant audible structure’.”

Zareei, speaking about the types of works that inspire him says: “it seems clear to me that the works of sound art and music that I am influenced by… can be summed up as the sensory experience of the conventionally non-interesting on a highly ordered and sensually accessible structure.” This idea of the conventionally ‘non-interesting’ being sensually accessible, strongly comes through in his work, which will likely evoke a sensory reaction in all its viewers, in one way or another.

Mo H. Zareei is currently living in New Zealand, where he is pursuing his PhD research on noise music and mechatronics at Victoria University of Wellington. You can keep track of his work through his website and Facebook page