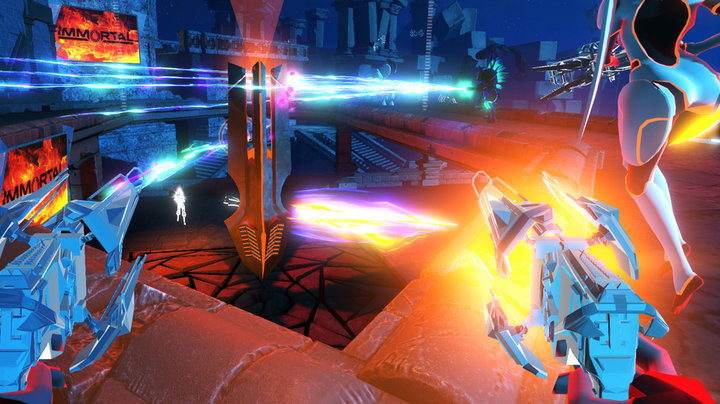 Rock Band developer Harmonix has been venturing out into new territory since the music-instrument-game craze fizzled, jettisoning a wall of plastic guitars at your local Best Buy. Announced yesterday, Chroma is the most unbridled departure yet: a rhythm-game and an FPS with a Tron-like battle arena and dubstep. Yes, that is a sentence you just read.

“How the fuck does that work?” you may rightly ask. Well, guns and characters are dedicated to different music genres, say hip-hop or free jazz. They shoot sequences of musical notes, presumably based on which buttons you press. Ultimately it comes down to killing dudes with dubstep melodies, which is about the worst fate imaginable. But let’s not forget the dubstep gun was the best part of Saint’s Row 4. It’s a wild outlier of a premise, but if anyone can pull it off, it’s the extremely creative guys and gals at Harmonix.

Watch the teaser below and enjoy immensely when the lady with the arm cannon shoots the guy with the dubstep gun.