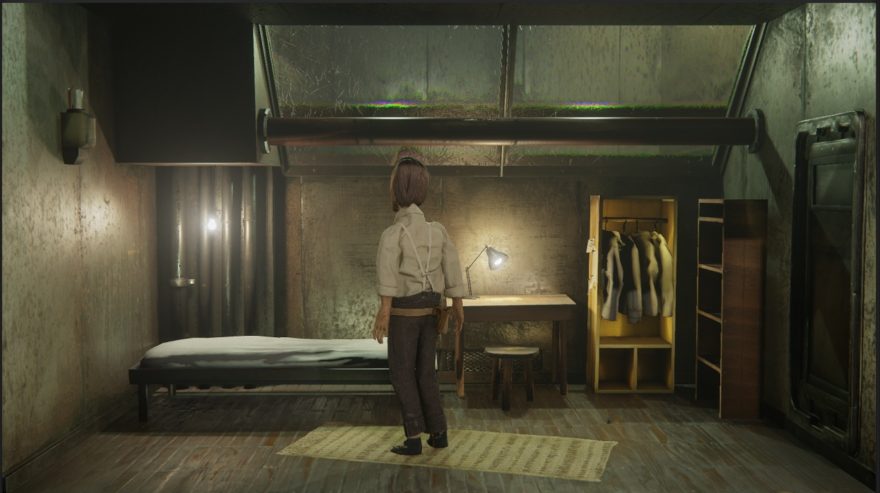 Like so many of the best ideas in history, the idea for Harold Halibut came from a dinner table  conversation. Onat Hekimoglu and others were discussing their love of old stop-motion films. Films like Jason and The Argonauts (1963) and The Valley of The Gwangi (1969). Hekimoglu, the lead writer, designer and composer, explained to me that the origins of his upcoming adventure game Harold Halibut are found in those films of the past.

In an era before complex computer graphics, these films used stop-motion photography to create large-scale fights with skeletons, or to wow audiences with massive dinosaurs. Now stop-motion photography is a relic of the past, though, not entirely dead. Last year’s Star Wars: The Force Awakens actually used the old-school technique to recreate the iconic holochess table from the original film.

Hekimoglu and his German-based studio Slowbros are using this classic technique to create Harold Halibut, which he describes as a “Handmade Video Game.” But what does that actually mean?

“we, too, live surrounded by physical imperfections”

Everything you see in Harold Halibut was created first in our world. Every person, every chair, every kitchen appliance—all of it was created using painted models, sculptures, cloth, and more. After building all those objects and characters, Hekimoglu and his team scan them into the virtual world using a technique called photogrammetry.

“We put every single thing in the game on a turntable.” Hekimoglu explained. “Then we photograph it from every angle to then feed it back into the photogrammetry software which generates a high-poly model out of them.” After lowering the poly count of the models, the team can then use them in real time in the game environment. Using photogrammetry, Hekimoglu and his team are able to create digital replicas that look incredibly similar to their real-life counterparts. This lets the team have models that look like handmade puppets, but have all the benefits of digital 3D models, like real-time lighting and physics.


Using real-world objects also has its advantages, as well as some problems that you wouldn’t normally have to deal with when making videogames. As Hekimoglu pointed out, “there’s no control+Z-ing” mistakes in the real world. If you’re working on a puppet and drop and break it, that’s it. You can’t quickly copy and paste a new one or undo the damage. But some of these mistakes are useful. Uneven table legs or paint smudges aren’t always a bad thing. “[These mistakes] end up bringing familiarity to [Harold Halibut] because, especially on a detailed scale we, too, live surrounded by physical imperfections.”

Harold Halibut is also a love letter to classic adventure games of old. These were the games that Hekimoglu and his team played as kids. But those games also have a reputation for being a bit obtuse and hard to finish. Hekimoglu is hoping that Harold Halibut isn’t as difficult. “The puzzle complexity is set somewhere between classic point-and-click adventures and walking simulators.” He continued: “The conversations and relationships between the characters are a lot more important than using or combining objects.”

As for the story of Harold Halibut, well, Hekimoglu isn’t saying much. He instead wants players to discover it for themselves. But he did describe the basic setup: Harold is a crew member on board a generational spaceship and the ship has crashed on a water planet. “So the setting is basically between a huge, half-intact submarine and the secret landscape outside of it. The crash is already long established once the player enters the scenario and the main task on board is to find a way back into space while dealing with the social enclosure of the ship,” Hekimoglu said. And like so many of those old adventure games, Harold Halibut will be humorous and filled with other characters to speak to.

Harold Halibut will be released sometime in 2018 for PS4, Xbox One, and PC. You can check out the official site and if you want to know more about the making of the game, you can check out its blog.