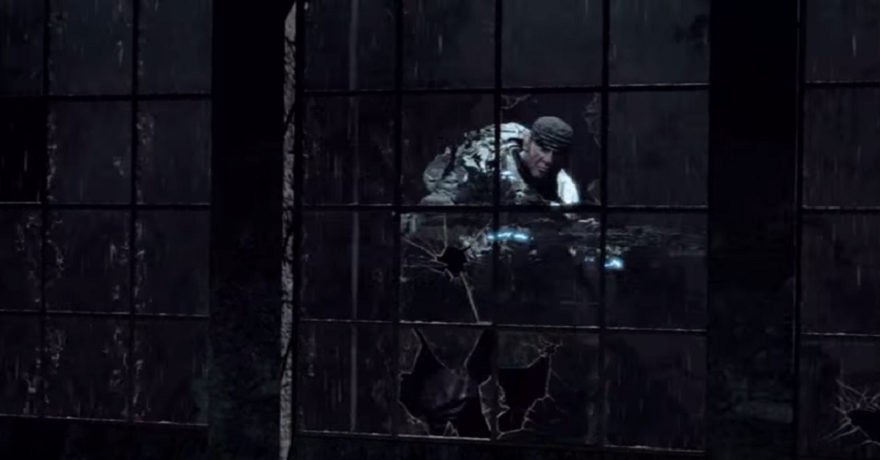 Unlike movies, videogames rarely have memorable trailers. Most of the commercials created to show them off are either brief sizzle reels or prolonged, hacky punchlines. The TV spot for the original Gears of War was an exception, however. Undercutting the promise of apocalyptic alien carnage with the solemn baying of Gary Jules in his cover of “Mad World” led to a stop, turn, and watch moment. Somehow, the juxtaposition of a lone, bandana-clad bro running through a deserted metropolis with the melancholy musings of a piano and folksy singer-songwriter compelled a second look. Thus did it become, at least in certain circles, synonymous with a new series of raucous third-person shooters.

It’s not too surprising then that Microsoft decided to slather our heartstrings in nostalgia before tugging at them in its marketing for the remake. While the original trailer played up the mystery surrounding Gears of War’s tragic world, the new version focuses instead on dishing out red meat to the series’ loyal fanbase. The futile heroism of Marcus Fenix fighting against an enemy who has already won is replaced with exploding helicopters and blood-splattering chainsaws. Context can be everything, and hearing Gary Jules reticently reflect on civilization and its discontents becomes a less charitable dance partner when paired with the series’ more overtly garish and adolescent trappings.

Songwriter Roland Orzabal wrote the original “Mad World” when he was 19. Inspired by Duran Duran’s “Girls on Film,” the song was also a way for Orzabal to address the broken family life and bouts of depression that plagued his upbringing. “The dreams in which I’m dying are the best I’ve ever had” line, as he explained to The Guardian a few years ago, came from Arthur Janov’s The Primal Scream, as did the idea that “nightmares can be good because they release tension.”

But whereas the Tears for Fears’ version is frenetic and anxious, with pulsing synthesizers and a disdainful Curt Smith on vocals, Gary Jules’ cover, originally recorded for Donnie Darko’s bizarre denouement, resigns itself to the world it describes. In his analysis of the Michel Gondry-directed music video created for Jules’ “Mad World,” critic Chris Norris saw the new version as emphasizing the estrangement of adulthood, referring to the hit single’s “isolation and suicidal imaginings” and the “unbridgeable distance” that separated Jules from the goings-on he’s singing about.

Describing the song’s use in the Gears of War trailer a couple years later, writer Tom Bissell observed something similar, attributing the TV spot’s “harsh-tender dissonance” to Jules’ mournful singing. It made Fenix, the commercial and eventual game’s protagonist, out to be “something that few video-game characters had yet managed to be: disappointedly adult.”

The contrast this time around is much more crass. While aspects of Jules’ melodic, minimalist alienation still resonate, the space marine melodrama it’s intended to underscore strikes a discordant note. Less disappointedly adult than laughably absurd. A reminder that you will no doubt feel things while playing Gears of War, but disillusionment with society and its vicious circles probably won’t be among them.