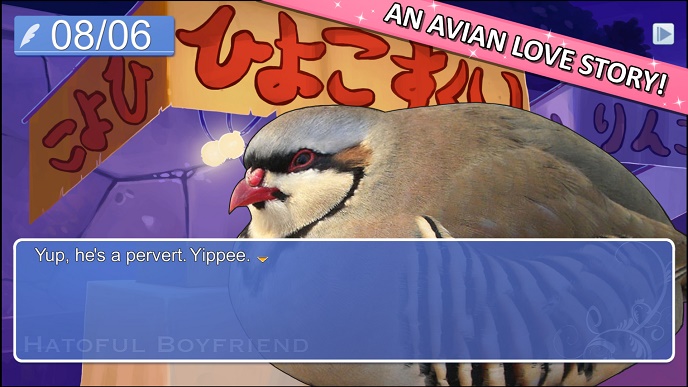 There’s not much to say about Hatoful Boyfriend that hasn’t already been said. It’s a dating sim set at an academy for pigeons. And yes, it surpasses the hype. With a premise as absurd as pigeon-dating, I expected to spend the game laughing. While it’s all fun and birds to begin with, shit gets real fast, in the best way possible. Hatoful’s absurd humor thaws even the most icy cynic’s defenses to deliver an unpredictable and fascinating narrative. Even if visual novels aren’t your thing, Hatoful Boyfriend is worth playing.

It begins as the pigeon dating simulator of your dreams. You’re the first and only human attending the world’s most prestigious boarding school for gifted birds, St.PigeonNations. At school you attend classes and clubs to flirt with your classmates, altering your interests and choices to please the birdie of your affections—all tame dating sim stuff with a heavy dose of bird puns. Your bird classmates and teachers are all different flavors of magical anime boy archetypes. There’s the Nice Bird you’ve known since he was barely hatched, the Rich, arrogant French Bird, his Mysterious sexy half-brother, your Sensitive, narcoleptic home room teacher, the Track Star who only cares about pudding. There’s also a creepy doctor whose sinister chuckling foreshadows the evil shit you’re about to discover. These tropes are familiar to fans of male ensemble mangas targeted to women, kind of like an all pigeon Ouran High School Host Club with less fawning school girls.

Your semesters at St. PigeonNations progress as you attend electives and unlock wacky school drama, like weird brotherly sexual tension and fights over the legitimacy of cafeteria pudding. If you’re like me, your first impulse was to try and date at least two birds at once. Unfortunately, the mechanics don’t allow for playing the field, and you’re dramatically punished if your affections are unfocused. While forcing you to be monogamous is pretty lame, it serves an important purpose: Since each playthrough is devoted to one pigeon, you get to know each of their personalities. Each playthrough leaves clues and dead ends to encourage the player to keep playing and satisfy his or her curiosity. The narrative builds suspense by structuring each playthrough of the dating sim portion as episodes. Since the mechanics guide players to focus on a single bird, the episodes serve as in-depth introductions to their characters while leaving clues to the overarching plot.

The story gets deeper, darker and weirder as the episodes progress. The narrative builds suspense by pacing the clues to the metaplot. Clues that provoke questions like: Why am I the only human? Why do I live in a cave? Who does this student ID I found in the hallway belong to? Wait, why is there a school for birds again? These questions are only answered after unlocking all the episodes.

By the time the lore of Hatoful Boyfriend is revealed, you know the pigeons intimately. It’s much easier to care about their fate, and the outlandish metaplot, than if everything had been revealed over the course of a single playthrough. After a few hours, I had grown so attached to the pigeons that I shed a couple tears towards the end, after which I immediately reprimanded myself for crying over a game about an all-bird boarding school. Hatoful, like The Walking Dead and Kentucky Route Zero, is an example of how television’s episodic structure can be applied to games to build narrative suspense and emotional investment on the part of the player. If all of St. PigeonNation’s secrets were crammed into a couple hours of bizarre gameplay, I don’t think I could handle it.

Even spread out over about 9 hours, there were times when the plot was a little too outlandish, and I say that fully understanding the absurdity of criticizing a pigeon dating sim for implausibility. It draws a clean line: if you prefer plots that are weird to begin with and just get weirder, you will be extremely happy with Hatoful Boyfriend; if you don’t feel excited by every single Japanese pop culture trope re-enacted by pigeons, Hatoful Boyfriend might not be for you.