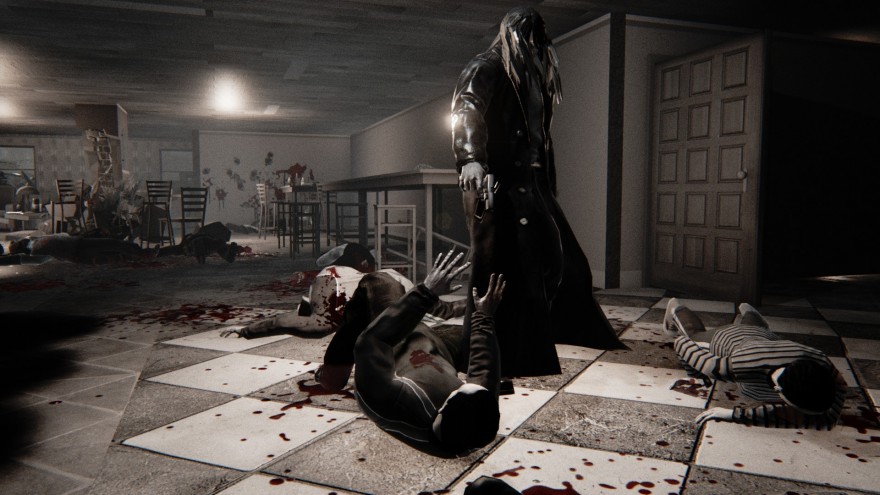 The one mistake I don’t want to make is to assume that Hatred doesn’t need to be taken seriously. It’s not an uncommon stance I’ve seen—that due to the contradictory, nihilistic and juvenile impulses at its core, we’re better off either laughing at or ignoring it. I can understand the impulse; it’s not a fun thing to look at. Even less so to play. It would be easy and comfortable to ignore it and try to rid it of its power. There have to be better things we could be talking about, right?

a piece of art that so dearly wants to be transgressive

And don’t get me wrong, Hatred is juvenile and contradictory, a failure on most every level. But remember that teaser trailer? In the circles I frequent, its release was met by an outcry of disdain and horror, emotive gut reactions to the very idea of a game like it, where you engage in the wholesale and repeated murder of innocent people as the entire core conceit. Certainly part of this was due to its context and the reactionary views of its creators—it was released during some of Gamergate’s worst moments, and it seemed to be a readymade embodiment of the asinine sentiment that videogames should not strive for inclusivity or try to reach beyond violence.

But part of it was simply due to what it claimed to be. A murder simulator. Hatred is a game that wants to be transgressive, wants to strip the violence in videogames down to its barest essence and revel in it. And many, myself included, found that idea personally upsetting. Despite the high volume of violence in videogames in general, and despite the clear juvenalia of the presentation, we were disturbed. We were upset because violence itself is disturbing and disturbingly real, and there’s something profoundly discomfiting about being confronted with it in such a way.

Hatred, as a piece of transgressive art, is a failure. It’s dull, its violence crass and unconvincing, and its understanding of humanity shallow at best. But it’s worth looking at, if only to understand why, and if only to interrogate what, if anything, could be gained from peering closely at something so horrible.

Theorist and playwright Antonin Artaud had an idea he called the Theatre of Cruelty. It was a theory of stagecraft based around the idea that the theatre could become a space for ritualized, simulated transgression and violence, a wordlessly loud spectacle of the ugly and the incomprehensible. In The Theatre and its Double, he articulated this concept, imagining a theatre that used its space to pull at the unconscious, primal urges Artaud believed were at the heart of every person. He believed we could use theatre to bring those urges out to the surface, confront them, and purge ourselves of them in a sort of theatrical exorcism.

One of Artaud’s ideal theatrical subjects, he wrote, was the ancient sacking of Jerusalem by the Babylonians. As described in the Bible, it was incomprehensibly horrific, mired with murder, cannibalism, all the worst impulses of mankind brought to bear. For Artaud, that was perfect— the ideal site from which to exhume and autopsy the worst of mankind.

I’m not telling you this to suggest that Hatred was influenced by Artaud, or has some redeeming value as a videogame equivalent to the Theatre of Cruelty. But in critiquing a piece of art that so dearly wants to be transgressive, Artaud seems a useful thinker to keep in mind. Because Hatred, in a way Artaud might recognize, tries to situate itself in relation to a real, recognized example of human cruelty.

Starring a trenchcoat-wearing man carrying an automatic rifle, wandering through civilian space, Hatred intends to evoke the modern mass shooting. This is its subject matter, and, as the player, perpetrating this mass violence is the goal. Which begs the question: why? What is it trying to accomplish? By taking on such a subject matter, the game places itself at the nexus of a number of powerful issues and veins that real transgressive art has let bleed— anonymous violence, the relationship between spectacle and real destruction, the pernicious discomfort of simulated death—but it doesn’t seem particularly interested in any of them. It doesn’t even seem to understand them.

Here is a typical moment in Hatred: I fire a single shotgun shell, announcing my presence. Then I kick a door open, charge in. The people inside the house I have just invaded scream, scatter, beg for mercy. I come up close to one of them, a man. I kick him to the ground, then pull out a knife and jab it into his throat. He gurgles blood as he dies.

Except no. That’s not what happened. What happened is this: I tap a button to kick a door open as a number of sprites I couldn’t keep track of move around. Due to the low light, I can’t really see the sprite directly in front of me, and I fumble with the melee button a couple of times until a sound cue indicates they fell down. I walk side to side for a moment, as, again, the low lighting makes it difficult for me to see them. I tap a button, and a canned (though brutal) murder cutscene plays, one I’ve seen several times before. The player character, a diesel-engine voiced Lobo cosplayer, mutters one of a handful of one-liners, and I move on, shooting at figures I can’t quite see.

See, Hatred makes choices that seem to obfuscate its own subject matter, taking any potential immediacy or impact away from its gameplay. It’s played from an isometric perspective, giving the player a bird’s eye perspective that always feels just a little too far away to make the action feel really comprehensible. And the levels are displayed in a washed-out black and white style that renders the violence weightless, without impact. Half the time, I didn’t even feel like I could see who I was shooting. It was a bloodless, sightless affair.

Not that I’m pining for a more brutal version of the game. But for a game so obsessed with violence, it places it behind a thick glass window. And Hatred‘s idea of violence seems entirely divorced from the real conditions, psychological or material, that go along with actual violence. The protagonist is a joke, completely unlike the perpetrators of real shootings, with no motive behind a Final Fantasy character’s version of nihilism. He walks around spouting one liners, like a cynical revisioning of Duke Nukem. I’m here to chew bubblegum and kill all innocents, and, well.

And the violence exists in a vacuum, apart from any oppression or failure of mental health care or any other structural condition from which mass shootings might actually emerge. And by placing all the action at such a far remove, Hatred removes any possibility for empathy to emerge with regards to the protagonist’s victims. Nor is there any room to enjoy it, for the game to attempt to force you to confront your own primal, cruel self in a way Artaud might have admired. There is no dissonance, moral or otherwise. Just boredom, and repetition, and a strange feeling of haziness. Playing Hatred is like sleepwalking while dreaming of a thick fog.

With such a disconnect from the reality of violence, it might be reasonable to turn instead to videogame violence itself as a potential subject for Hatred‘s transgression. Its title font is reminiscent of Doom, and as I’ve already noted, the protagonist seems an amalgam of generations of videogame manshoot heroes. But here, likewise, the representation falls apart. Again, the developers don’t seem to understand why its audience might want to play violent videogames. The assumption seems to be that violence is to be celebrated simply for its own sake, that if they plaster enough dead bodies around, then it will have engaged its violent playership. For some of their fans, unfortunately, they may be right, but I found no cause to reflect here. And, at times, it gets so typically videogame-y that it’s hard to believe that there was any self-awareness involved at all. Most of the stages devolve almost immediately into standard shoot-outs with the police, giving it the same cops-and-robbers feel as nearly every other game about crime. There’s a sewer level, for god’s sake. It’s a tone-deaf simulation of a tone-deaf simulation, twice removed and exponentially more worthless.

Hatred got our attention, I think, because it channeled something real and frightening with its subject matter. But the game proper can’t even fathom its own violence well enough to say anything about it, or even to present it in a way that might be consistently distressing. Artaud conceived of transgressive art as a mirror, a way to press up against real horrible truths lurking in our humanity. Hatred was likely never going to be such a game, but the contrast shows us what real transgressive art in games could look like, what it could accomplish. We need games willing to encounter the real spectre of human cruelty, even simulated cruelty. We need games willing to probe and even harm. If games are going to be so enamored with blood and guts, they should at least endeavor to do that for us.

What we have, instead, is Hatred, less a mirror than broken glass. When watching the trailer for the first time, seeing its unabashed love of carnage, there was just enough substance to raise the question: why would anyone do something like that? Hatred, for better or worse, couldn’t even begin to tell you.

Correction: Due to an error, our score for this originally read “70.” It has been updated.