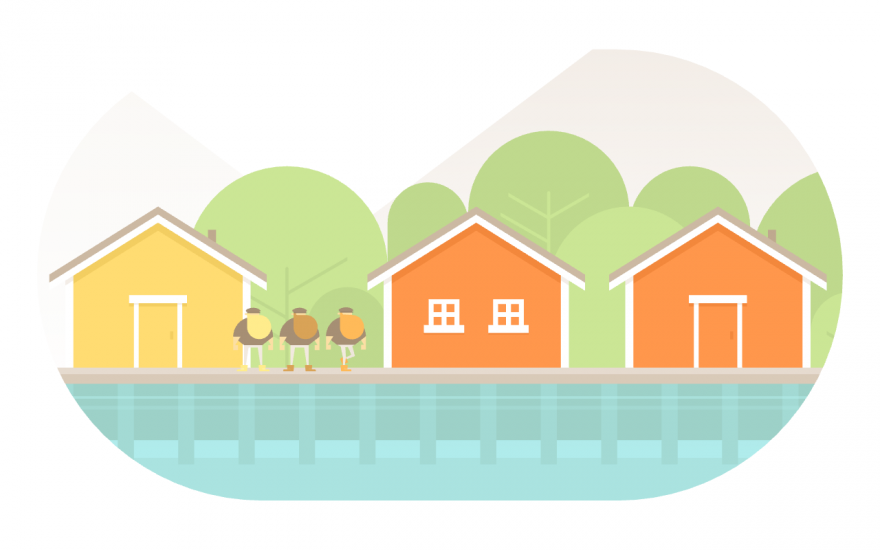 Sometimes going out into nature just isn’t enough for a man. Sometimes, he wants to explore further and live a real adventure. Sometimes—nay, all the time—I want to witness that adventure in Burly Men at Sea.

Burly Men at Sea is a brainchild of David and Brooke Condolora (aka Brain&Brain), the pair who previously created the delightful adventure game Doggins. It is the story of three burly, bearded fishermen who grow tired of their daily routine and decide to do something truly extraordinary. Further narrative details are hard to come by, though Brain&Brain have explained that “you play as storyteller and wayfinder, shaping the narrative around the characters through interaction with their environment.” Thus, insofar as the narrative is largely a product of your choices, it cannot really be described in advance.

The game’s visuals, however, can be described, so let’s do just that. Burly Men at Sea uses crisp vector art rendered in blues, greens, yellows, oranges, and browns. “I’m using the same technique of limiting colors as with Doggins,” Brooke Condolara explains on the game’s devblog, “though it had a far more limited palette.” In the game’s trailer, the characters move with a calculated awkwardness, like their limbs were cardboard cutouts attached to their bodies with pushpins. The net effect is that the game feels like it has been built out of the shingles that cover a cozy Scandinavian cottage.

Speaking of housing, the Condolaras recently announced that they would be heading out to work on a farm outside Portland in September. “This cuts our expenses significantly, gives us some good hearty work away from screens, and it’s exactly the sort of quiet adventure we love,” they wrote on their devblog. “And hey, as far as we know, we’ll be the first indies to fund a game with farm work.” This funding approach may not catch on in the game world, but it seems fitting for Burly Men at Sea. There is always further exploring to do—that is what the titular burly men do, and that is how Brain&Brain will bring them to us.

Burly Men at Sea is currently in the midst of its Steam Greenlight campaign and due to be released in late 2015.