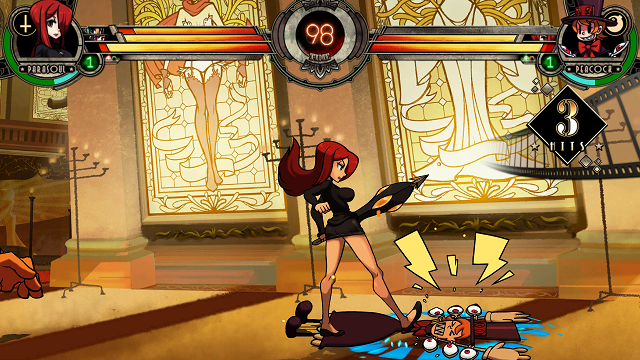 Game development doesn’t have enough drama to make a good TV show, normally. But, if you forced me to make a show for TNT (oh alright, if you insist), I would pull inspiration from the fighting game Skullgirls developer: Lab Zero. Just this last week their publisher Konami, without telling Lab Zero, requested that the game be delisted from PSN and XBLA. The game is slated to be taken down before the month is out, but there is a chance that Lab Zero can recover by using another publisher. Failing that, they can try again next year. The thing is, this obstacle is just the latest in a Homeric odyssey of ups and downs for the developer.

Skullgirls started off as the product of two guys, who pitched it to several companies before getting picked up by a development company called Reverge Labs. Eventually two co-publishers jumped aboard, Autumn and Konami, and things looked hunky dory for the devs. The game was well-receieved by critics and tournament-types. Then, like some sort of errant kraken attack, Autumn got caught in a legal brawl about a completely unrelated game and couldn’t continue funding Skullgirls. Piling one tragedy upon another, most of the team got laid off from Reverge Labs. They managed to reform the same team and continue to work with Autumn under the moniker Lab Zero.

Still, they were mostly moneyless. Lab Zero ran an Indiegogo page that raised almost six times more than they had asked, spurning them to plan a whole slew of new content for Skullgirls. Back on top! Of course, around this time news about the problematic relationship between Lab Zero/Autumn and Konami began to surface, and last month Lab Zero announced they were in the process of ceasing relations with Konami. That brings us to present day, where Lab Zero finally made it home from their odyssey only to find Konami is burning their house down. Anybody got Michael Chiklis on the rolodex so we can make this happen?