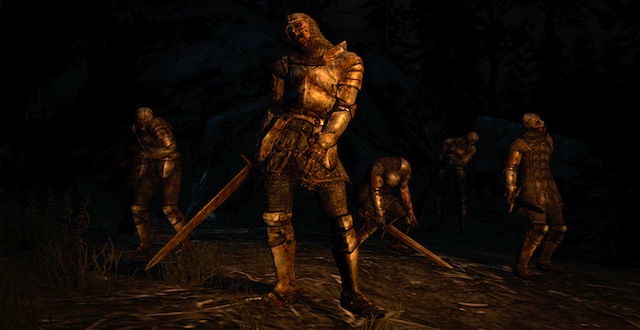 
Dragon’s Dogma opens with an acknowledgement of wastefulness, quoting the poet Henri de Régnier’s fragmentary aphorism: “The delightful and ever-novel pleasure of a useless occupation.” It’s an open call to set aside prejudice about the worth of the forthcoming experience, and indulge in it without guilt. In other words, it pre-supposes guilt for being unproductive.

Players will still have an occupation; they’ll be born into a fantasy world where progress and productivity are mandated. Yet the game announces from the outset that nothing usable will come out of one’s time playing. Dragon’s Dogma is like a Rubik’s Cube, whose only objective is to undo the mess of altering its starting condition without having any idea of how it should be improved in the first place.  The game is a model of progress whose only product is a reaffirmation of its own form—an interactive dogma.

The game is a model of progress whose only product is a reaffirmation of its own form—an interactive dogma.

Fitting the mold of open–world role-playing, the game starts players as a poor nobody in a far-flung corner of a sprawling continent. A spasm of fate reveals this particular nobody its duty when an ancient dragon is awoken and begins terrorizing the small fishing village. The hero, who’s nameless and featureless until players customize her or him with a spate of sliders and menu presets, tries to kill the dragon when it attacks. But absent the right weapons and experience points, the damage done by her rusty little sword is barely perceptible.

The dragon punishes the hero—I called mine Momo, after a nickname I had 10 years ago—by cutting out her heart with its claw and swallowing it whole, our first displaced Rubik’s square in the otherwise perfect cube of a world. Momo survives this encounter through the supernatural interventions of storytelling, which christens her the “Arisen.” Momo is given marching orders to a distant part of the map where she’ll be told about an even more distant capital city that serves as the game’s hub, where Momo will run mostly violent errands for people while inching closer toward having the right gear and party members to fight the dragon again.

Momo will not march out alone into the world, however. Dragon’s Dogma borrows from the Wii Sports model of filling out the play space with characters invented and shared by other players, which the game calls a “pawn” system. You’ll be able to fight with up to three other computer-controlled pawns at your side. One of these is permanently bonded to you from the outset but the other two can be recruited, abandoned, killed, or traded in whenever you wish. The feature doesn’t allow cooperative play with human players, but only simulates companionship with the ghost of their character-building choices—their bizarre names and exotic weaponry embodying their individuality. If you play without an internet connection, the game will randomly generate pawns for you, but playing with the husks of other people’s invented selves is comforting. It leaves an open space to imagine the sodality of anointed ones keeping each other encouraged while on the hunt for cockatrices and wyverns.

Pawns are also a constant reminder of how meaningless the choices of personal growth are for the larger task of progress. A level 35 mage survives just as well as a level 35 warrior. There are fine-grain distinctions between the two, but the effect of having other classes in your party to compare against shows just how constrained the illusion of choice is. You’re never allowed to hire a pawn who’s 30 levels higher than you, for instance. That’s not the kind of utilitarian thought the game supports, so you delight in the ever-new pleasure of knowing that all choices are roughly equivocated.

Dragon’s Dogma does works not because it provides a simulation of progress, but because it exorcises again and again the experience of being presented with choices that have been tamed, brought into the quantifiable realm of the knowable and linear. It reaffirms the faith we have in the idea of progress: the possibility of incrementally improving one’s self, turning experience into substance that carries in its embroidery the acts that led to its making.

In describing theatrical wrestling as a central myth in Western culture, Roland Barthes compared its fakery against boxing.

The logical conclusion of the contest does not interest the wrestling-fan, while boxing on the contrary always implies a science of the future. In other words, wrestling is a sum of spectacles, of which no single one is a function: each moment imposes the total knowledge of a passion which rises erect and alone, without ever extending to the crowning moment of a result. Thus the function of a wrestler is not to win; it is to go exactly through the motions which are expected of him.

In the same way “good” and “bad” wrestlers act out a moral play where the unrighteous villain is punished with violent exaggeration, Dragon’s Dogma acts out its myth of advancement with the lone hero in rags incapable of doing anything of significant productivity. Only after hours of battles won—each all but impossible for persistent players to fail—do they move forward with new accessories and unlocked attack animations, paid for with experience points and not discovered through skill.

This darkens the opening epigram. If being non-productive is an indulgent pastime, then all non-indulgent time must be spent surrounded by the expectation of producing, creating, advancing, and, finally, making a show of having done so.

Paradoxically, there is nothing to actually produce in the game. Everything that can be had exists already and has been anticipated by its designers. They didn’t know my character would be called Momo and would end up with the gear that she did, but they knew that when I reached level 42 as a warrior I’d be capable of doing a certain amount of damage in combat and that the monsters I’d be given to kill at that level should be able to stand that range of damage for a certain period of time while giving back some of their own to me. Nothing has to be created, but giving away everything from the start would ruin the experience—which wants its vision of a long, woven line threading in and out of the wilderness as if possessed by some manic ghost in another dimension.

It is this diverting blur of movement that makes it possible to see the game’s drip feed of objects as progress, and the patience of the player enduring under the game’s stilted arithmetic. You win, the game tells you again and again, but you’re still too much the same to be worth anything. It reminds you of this every time your little Momo’s stamina meter runs out and she staggers, unable to move for a few moments while she catches her breath. Go win some more—one more quest, one more object, one more unlocked ability, one more thrillingly useless occupation. Dragon’s Dogma is to videogames what WWE is to sport—an excuse to have an unnatural and insupportable belief reaffirmed.