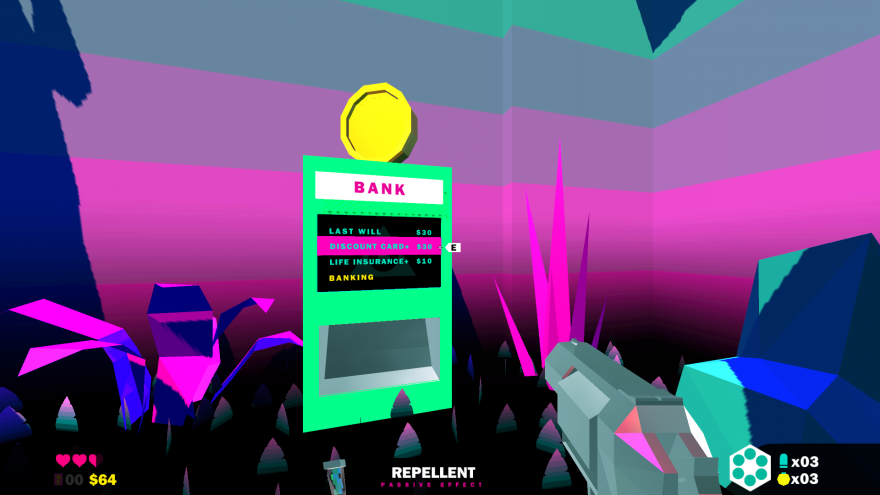 Guns have a certain persuasion when held to the faces of bank tellers. That’s why it felt strange holding a six-shooter while depositing my first $50 in Heavy Bullets. I’m no John Dillinger.

Luckily, for those on either side of the barrel, the teller had been replaced with a fluorescent green vending machine. That’s why I didn’t feel bad flinging a grenade at it after I was done. I was curious as to what would happen. Explosions and showers of coins, as it turns out, are what happens.

Heavy Bullets is an exercise in managing cash flow.

Your mission in Heavy Bullets is to get to the eighth level; the security system has malfunctioned, and that’s where you can fix it. The turrets are used to keep out the hostile wildlife but they’ve turned on you instead, and the facility is being overrun. In other words: everything’s against you. And there I am, as if in the middle of town, checking what savings I have left like a groggy undergraduate with no memory of last night.

Being broke isn’t so bad in Heavy Bullets. It’s running out of ammunition that will do you in. If you play it right and play it safe, there should always be bullets lying on the ground, dropped by enemies. Also, a missed shot doesn’t waste a bullet, but you do have to retrieve it from the wall it bounced off.

That’s a problem as the risk runs high upon every new corner. The enemies move fast and hide well in the foliage. You have to load each bullet into its corresponding chamber, which can mean squeezing the trigger and hearing a dreaded “click” if your memory was off. And permadeath means you’ll regret every death.

The only thing you carry between lives is your deposited savings. You can also buy life insurance to give yourself a bit of starting cash in your next attempt. But you may want to spend your money rather than save it: to heal, for more bullets, or to acquire a homing rocket. When it’s not a first person shooter, Heavy Bullets is an exercise in managing cash flow.

The relationship the game forms between you and munitions is in stark contrast to what you’ll find in most other shooters. Rather than reeling off endless bullet belts at a stirring in the horizon, each bullet is aimed carefully, plunging into gnashing jaws that pop into ammo and coins immediately. A similarly pensive complexity is achieved with those familiar shiny game coins; this isn’t “Collect 100 coins to get an extra life”; this is discount cards, withdrawing your life savings to take a gamble, and investing in your next of kin.