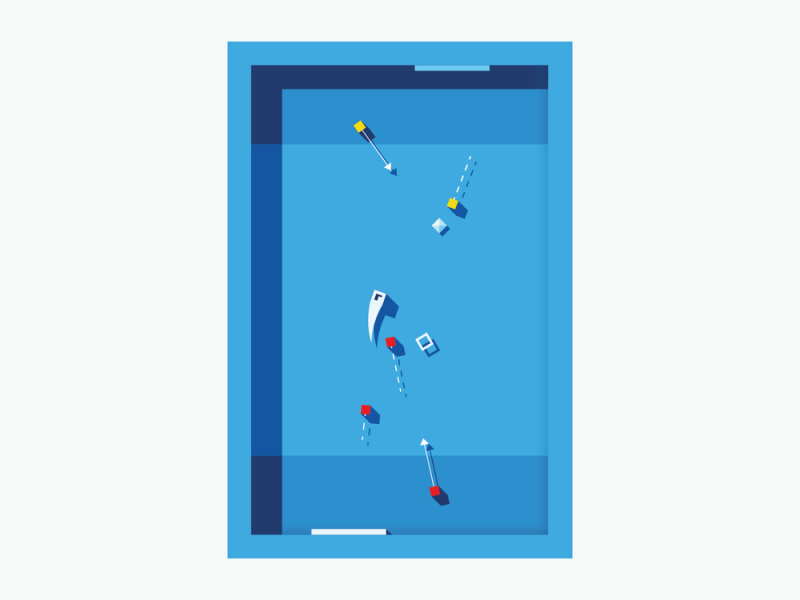 The boardgame Crossfire was the definition of 90’s “EXTREME” maximalism. Just remember the ad: Thunderdome-style arena, fingerless gloves, lightning, leather, and flashing smoke all conspired to convince impressionable young me that this ball-bearing gun-soccer deathmatch was the most intense experience available to mankind.

Reality is more tempered and smaller than it appears on TV, including Crossfire. Intense only in glimpses, it was much more likely to blister your trigger finger and fire tiny metal spheres across the house, lost until the heat death of the universe. The game could be occasionally fun, but occasional fun isn’t what we were sold. We were sold postapocalyptic hell in a box.

Hecticube’s creator Graham Reid is selling something, too. He stands out at PAX East for being somewhat reserved, sharply dressed in business casual attire against a backdrop of oversized cardboard weaponry. It’s his and Hecticube’s first time at such an event, and he’s eager to approach folks who might want to check out his initial go at game design—but at the same time, he doesn’t want to be a bother. As such, he’s the inverse Crossfire’s TV ad.

Which is interesting, because Hecticube better approximates the potential spectacle of Crossfire, downsized to tablet dimensions. Each player has a paddle they’re trying to defend from a large central block, which is getting banged around the screen by the tiny cubes flung from each players’ thumbs. The tiny cubes hit the big cube and hopefully nudge or bash it to the other side, hitting the opposite paddle, knocking it senseless for a second and shrinking it. When it’s shrunk to nothing, that player has lost.

Hecticube is a perfect portmanteau, then, to describe this chaos, and it’s got a sharp flat sensibility that keeps the focus on the game. The few visual flashes have meaning and the mayhem is kept discernible. Each match is personal, requiring both players and their physical digits on a single tablet, with no plans for any attempts at online matchmaking. Reid is working on an AI opponent for single-player potential, but it’s very much in progress, and he says he’s learning as he goes. Balance is key in AI of course—it doesn’t have the weakness of joints and muscle holding it back—so Reid is working on programming in the capacity for human error.

With Crossfire, human pre-teens were presented as something more fabricated, intense, super-powered. Sadly, we weren’t, and the real Crossfire couldn’t compensate for the drudgery of broken plastic and lost ammunition. Hecticube has transposed that dream: it’s the computer that must approach humanity. And even then, nothing beats a grudge match with two players and their attendant eyes locked downward, with flailing thumbs and flying cubes.