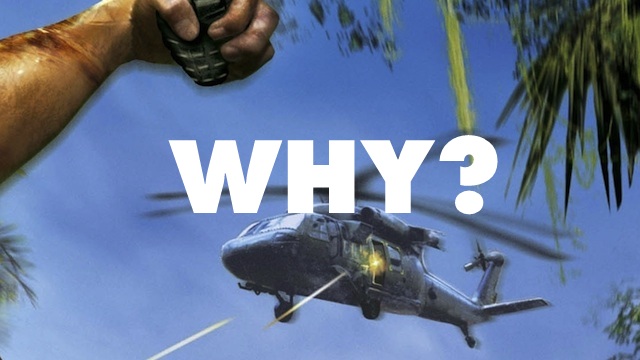 Like any other movement or medium, games are defined by the norms. Tune in to a country music radio station (we’re not suggesting this at all, by the way) and you’re guaranteed to hear a steel guitar, vocals that sound more like yodeling, and at least four songs about America. Turn on the tube and you will generally find the same reality show about noodling or some poor schmucks competing for a job.

While I can see the novelty in watching a balding, shirtless boob pull a thirty pound catfish out of an underwater hole with his bare hands, games seem to be so entrenched in conventions that it gets to the point where I start to wonder: if we got rid of the tropes, would the medium be threadbare?

The appalling overuse of tropes in games is the topic of a very active thread on Reddit, which asks: If you could embargo any trope from appearing in any game for a minimum of five years, what would you give the axe?

It’s a tight race for most up-voted trope, but right now the top contenders are helicopters that inevitably are going to crash, the karma system that rewards you for being the epitome of good or evil, and “infinitely respawning enemies. Because fuck that.” The least overused trope? The “no ending” or “what now?” trope, which I’m not sure counts as a trope but reminds me of the ending to No Country for Old Men.

Truthfully, I’d rather see more games that end with the player in total confusion and asking their spouse “Is it over?” than games that use the meta-trope of making commentary on how ridiculous the tropes of other games are, as were on the rise last year in games like Far Cry 3 and Hotline Miami and Spec Ops. That’s what we Reddit have for.

Bottom line? Meta-commentary on the overused tropes of other games is over. IT’S OVER!