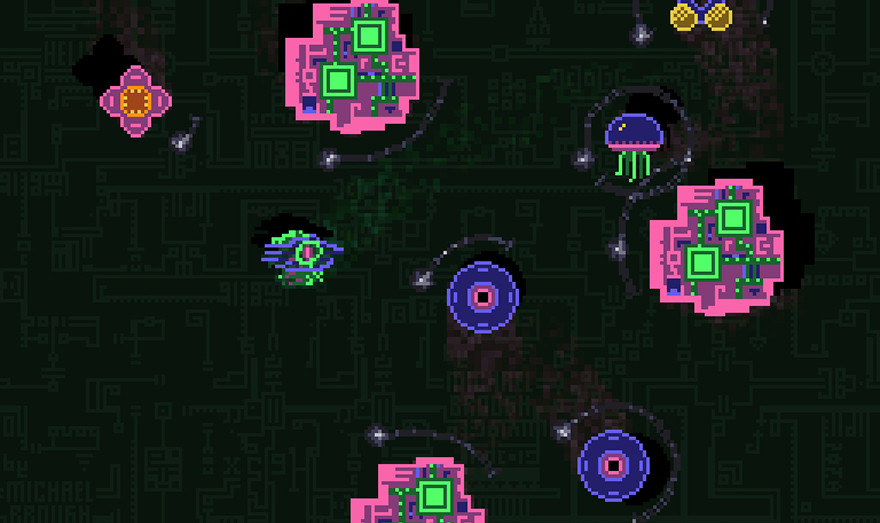 Something has been lost as games migrated from the arcade to our living rooms. What chiefly comes to mind—oddly—is salesmanship. That is, the part of games that acknowledged they don’t exist in a vacuum and must compete to dazzle, and huff valiantly into a tin whistle to make its siren song that much more alluring. Things like attract mode (pre-recorded demos to entice passersby to drop their quarters) and outrageous “Continue?” screens are moldy relics, or by modern standards antiquated kabuki that did little more than smash the fourth wall and call attention to the fact that the game knew it was a game and wanted you to spend money in it.

In hindsight, though, what those promotional gimmicks hath wrought were things tougher to come by these days: breathers. Helix, the latest from the über-prolific Michael Brough is an indication of how far—in a good way—a player can be pushed to keep going without pausing to mop her brow.

The more you encircle, the faster things come flying at you.

Helix is ugly and abrasive, resplendent in its placeholder-chic graphics and oppressive in its singular demand: Everything that comes on screen, you must encircle. And so, every flower, circuit board, jellyfish, whatever, you must engage in said mating dance, issuing a climax with exploding pixels and a number telegraphing your score. Eventually, “tougher” enemies emerge like arrows swirling counterclockwise or its antonym, large blobbier circuit boards, or hands with arrows within their palms imploring you to obey.

The more you encircle, the faster things come flying at you. You have to counter and react in the moment until inevitably you lose. If you are skilled enough you can unlock other modes that introduce new wrinkles (in Terror mode, the shapes move much quicker; in Vortex mode, you are magnetic to all shapes)—but you have to keep looping, looping, looping.

This is, really, all there is to Helix. This is not said as a judgment but rather as a statement because there is a tad more under the hood here, assuming you don’t get too dizzy or have piss-poor motor skills that preclude you from clawing at some of the secrets herein. More on that in a second.

This is not a deep world and Helix is not a deep game. To truly understand my feelings about the game, I had to spend a few days away from it. It’s slickly designed to keep you from thinking—like the most absorbing games, I found myself completely losing track of time and hitting “again” when I actually intended to switch modes or do something important, like read Tumblr or Twitter. But then, Helix is a figure 8 turned on its side on the thinnest of ice and premises. Only, the purpose of skating here is to wipeout. Every time.

In keeping with the unrelenting pace on all modes, you cannot pause. You cannot catch your breath. The damaged soundtrack, itself another loop, does not care whether you live or die—the loop plays on regardless. Whether you’re a willing participant is almost not even up to your own discretion. You’re being given the cue to go onstage, so you go, because that’s what games have taught us to do after we fail.

But this is taught behavior. Part of the culture and etiquette around Japanese arcades entailed honoring your digital deaths. That is: When you fuck up, you move on and play something else. You aren’t supposed to hog the machine and pump it full of coins. If you were running a marathon and broke an ankle in mile 15, you wouldn’t go back to the beginning and start again or try to run a second marathon immediately after—you’d stop, recuperate, move on, and eventually try again.

I have become one with the loop.

Since Helix is so tightly constructed, what can easily be missed is the undercurrent of mystery. What works best about Helix is what worked best about Skyrim: Almost more fun than playing the game was debriefing with other players and finding out how far they’ve gotten, what strategies they’ve tried, and what secrets they’ve unearthed. Brough has said that the best way of “doing ‘secrets’ [in games] is not to hide them in any cunning way, but to just demand players invest time to get to them.”

Secrets, insofar as I can tell, include the “spoilers” Brough has shruggingly unveiled in YouTube playthroughs including clock-demons that eventually emerge. I’ve only found one boss—some sort of weird shape I had no clue how to vanquish—and I’m unsure whether it’s the amount of time I survived or the number of blobs I encircled that “unlocked” this.

In other words, there are likely more profound differences between the modes I’ve mentioned above, but because I’m kept loopin’ and loopin’, there’s hardly time to rethink and redirect your approach. I’m not a cautious player; instead I’m the machine. I have become one with the loop.

This is simultaneously Helix’s greatest strength and weakness.

Like in Super Hexagon, Demon’s Souls, Groundhog Day, or much of life, the purpose is not so much about how you fare but instead the careful progression and consideration of the world around you, how you choose to honor what’s coming your way, and what you learn from that cycle of events.

And so it makes sense that Helix’s triumph is also its downfall. All loops close the way they start.