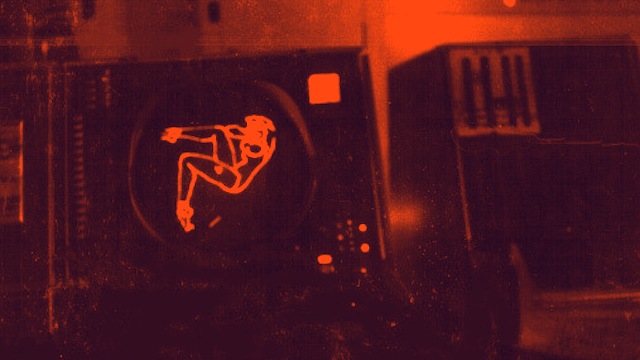 It has been said that war is long periods of boredom punctuated by moments of sheer terror. So what goes on during the long boring parts? I always assumed idle minds at war were occupied by the endless shining of boots and smoky rounds of poker.

Oh, but it’s so much unbelievably sexier.

As early as 1956, anxious airmen in the Air Force were doodling pin-up girls from Esquire on the cathode ray tube monitors of massive mainframe computers.

Among this very serious business of detecting incoming nuclear threats, someone decided to commandeer the AN/FSQ-7’s computing power and graphical display for something a little more fun. Using a console and one of the two SAGE computers, an enterprising programmer created a graphical interpretation of a pin-up style woman that rendered as line segments on the SD’s 19-inch screen.

In doing so, the pin-up’s programmer created the world’s earliest known figurative computer art, and quite possibly the first image of a human being on a computer screen.

This is crucial to games for obvious reasons. This rough sketch of a smiling floozy doing a half-crunch in little besides a pair of ballet shoes and a bonnet is the predecessor to things like pixel art and polygon drawings, not to mention the prurient subject of ASCII pr0nz. In other words, some unidentifiable but fastidiously-groomed Air Force worker unwittingly ushered in the era of computer art, using what was more or less an electronic Etch A Sketch.

According to an account told to The Atlantic, IBM instructors eventually rigged up a electric drawing of a dancing hula girl, whose skirt would dissolve at the push of a button, although this could be the fabrication of a lusty old Sergeant’s senile daydreams.

What gets me is that the artist of this historical artifact was in fact goofing off at work. He didn’t have just any job, but the very important one of monitoring the seaboard for the presence of incoming nukes — at the very height of the Cold War! It’s funny how the rise of our favorite pastime seems to coincide with our expanded capacity for getting bored. Largely considered the first videogame, Tennis for Two was created by William Higinbotham on a similar machine in order to amuse listless visitors at the Brookhaven National Laboratory.

It seems that our reliance on machines to do very boring tasks has resulted in a need to also be entertained by machines, as if to compensate for the time we’d normally be doing those tasks ourselves. It reminds me of the apocryphal tale of how GameBoy creator and Nintendo’s greatest engineer Gunpei Yokoi came up with the idea for the Game & Watch handhelds after watching bored businessmen mindlessly punch digits into their calculators on excruciatingly long train commutes.

Now excuse me. It’s time for my break when I’ll turn on the automatic coffee maker and play Joe Danger.