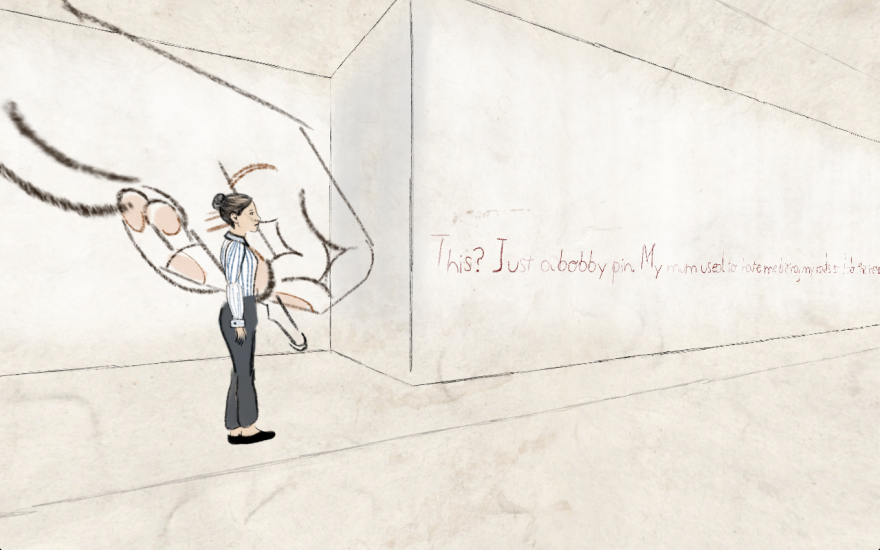 In a game where you play as a therapist guiding young patients through their most traumatic childhood experiences, the pen truly does prove much mightier than the sword.

Paperknife, created by DIT (Dublin Institute of Technology) Masters students Fionn Murray and Tiago Roldão, visualizes the navigation of a therapy session like a maze of gated hallways. In this roughly sketched world, your only controls are choosing between different hallways (which represent dialogue choices) and observing said hallway, papered with the result of your dialogue choice, through various camera angles (or perspectives).

As Dr. Joanna Dowell, you open up conversations with your patient by approaching and destroying a barricade that takes you down an irreversible path. The animation for destroying each gate is as definitive and final as a K.O. in Mortal Kombat. Dr. Dowell yields her Almighty Therapist’s Pen like a katana, stabbing each barricade square in the chest before slicing it open with one fell swoop.

Dr. Dowell yields her Almighty Therapist’s Pen like a katana.

“So,” she begins, the weight of each dialogue decision weighing heavy in her right hand. “What’s been bothering you?”

Your teenaged patient, Siobhán Rosenhan, has harbored a deep phobia of dogs ever since an incident several years ago. But like most phobias, the more you probe for details, the more it seems like the true object of her terror lies just outside the periphery of her memory—hiding from view of even Siobhán herself.

The closer you get to the real cause of the trauma, the more labored Dr. Dowell’s walk becomes. The world’s roughly drawn lines start twitching, jumping in and out of focus as Siobhán’s etched words on the walls run as red and thick as blood. The music, once quietly inquisitive, culminates into a disturbing clash of strings before your patient cuts the session off abruptly and you’re left to use your almighty pen to describe your failures in a summarizing report.

Paperknife treats words more carefully than most games treat death. Saying the wrong thing—rushing Siobhán into reliving an aspect of her trauma that she’s not ready for—is the type of failure that shakes you like even the most inconvenient Dark Soul’s death can’t. Because you don’t just fail yourself, you fail a child. A distressed child, whom you lead only down a dead end hallway.

While on the surface Paperknife might at first sound like a champion of therapy, it plays like a cautionary tale: the mind is a delicate organ to expose. Aside from the tricky dialogue decisions, certain camera angles leave the art looking like a mess of disconnected lines. It’s a purposeful mess, demonstrating how what can appear to be a picture of a dog from one angle also looks like a senseless fragment of shapes from a different perspective. The solidity of the game world, like our own subjective reality, proves fragile and incomplete.

The solidity of the game world, like our own subjective reality, proves fragile and incomplete.

Oddly, playing Paperknife reveals just how many similarities there are between experiencing a videogame and working through a therapy session. In both, you’re subjectively exploring an experience built solely around catering to a subjective experience. No one can discount someone’s experience of either a game or of therapy for the same reason that no one can “objectively measure” either of their values: because personal experience is personal experience. The labor spent in a therapy session or a game—anything the patient or player gains from it—is immaterial, intangible, incommunicable to an outside party. You can’t measure it with a yard stick, you can’t put a price tag on it, and you can’t give it away or show it to another person. While the layers of subjectivity inherent to both videogames and therapy can provide individualized explorations of a self-experience, their dependence on the subjective also allows people to discredit their worth.

Though the version of Paperknife available now features only one level, both Fionn and Tiago hope to complete the storyline between Dowell and Siobhán after ending their courses in January. They urge anyone who plays it for free to also provide some quick feedback to help them complete the project. To follow the game’s progress you can watch for developments on Twitter, Facebook, and Tumblr.