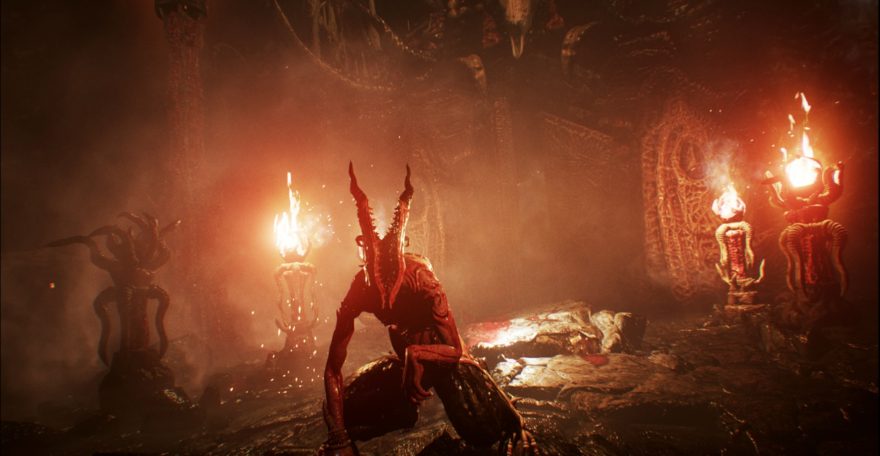 It’s been a while since I’ve seen a warning label at the beginning of a videogame trailer. “WARNING: This trailer contains violent footage and flashing images that some may find disturbing.” That’s how the Kickstarter trailers for Agony open up, before each of them start smashing heads open with fists—one is two minutes long, the other 16 minutes long, select your poison.

That’s the kind of warning I mostly associate with Resident Evil 2 (1998). That game came out a tender age for me, eight years old, when I wasn’t allowed to play horror games and therefore grew an obsession with imagining what horrendous things my parents were hiding from me. Given any opportunity to stare at the back of a box for a horror film or game, I’d read the summary over many times, and press my eyeballs against the tiny images so I could lock it all into my brain.

a man-headed baby is smashed to death with a rock

Some of the same tics from that time come back to me when watching Agony‘s trailers—eager to know what the heck is going on in its twisted depiction of Hell, but not able to see the full vision. The latest trailers creep slowly across structures made of bone and sinew, carpets of skulls, lined with bodies both dead and dying, past ritualistic chambers throbbing with gore and electricity, through tunnels where a man-headed baby is smashed to death with a rock.

All of this is some properly horrendous shit and I am really into it. Madmind Studios, the people making Agony, show that they’re not holding much back. See the pregnant women cut open, their dead children still hanging from their cords like some kind of gross Christmas tree decoration. It’s not that I go hunting this stuff down to satisfy some deranged bloodlust (although I guess that’s a part of it for all of us), it’s that I believe if you’re going to do Hell, you should go all out. Agony seems to be doing that.

Now that videogames are long past the days of Jack Thompson’s censorship campaign, they’re getting more confident with depravity and how to contextualize it—you know, so it’s not gratuitous or plain offensive. It’s still too early to truly celebrate Agony’s depiction of terror and suffering in Hell for this, but it’s a vision that promises a flesh and blood world that is perhaps more realized than any other in the medium. That’s enough for now.

It’s also for that reason it’s a bit of a shame to see the player’s objectives punched out in text at the top of the screen, rather than trusting them to work things out by reading the environment. But there’s time for that to change still. It seems that, should Madmind get the $66,666 to fund the rest of Agony‘s development, it’ll arrive sometime next year.

You can find out more about Agony and fund it over on Kickstarter.