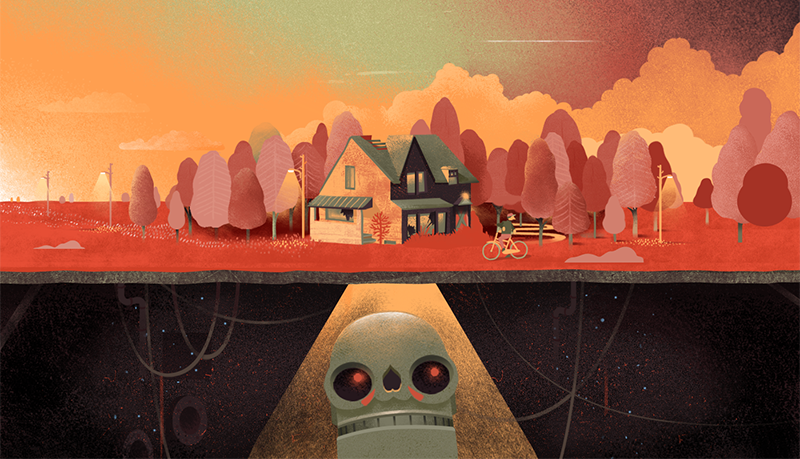 Recently, Honig Studios tweeted out some incredible visuals that were part of a collaboration with artist Rafael Varona, the animator and illustrator of upcoming mobile game Impossible Bottles.  Based in Berlin, the production company is made up of designers, developers, and writers whose goal is to create memorable interactive experiences. And judging by the thousands of people awed by the GIFs that were tweeted out, they’re well on the way towards that goal.

The premise of Impossible Bottles is that an inventor wants to create the first eternal source of energy by bringing his gigantic mechanic golems to life, generating enough power to satisfy global demand. However, this is deemed too dangerous as the robot would have to be connected to the global electric grid. And so the scientific community shuns him.

Eventually, the scientist expands his work to run a maze underground, housing his creations in secret. When he connects the mechanical beasts to the grid, they move erratically—causing major power outages to the world above. Your goal as the player is to help guide this genius inventor on his quest to fix his incredible machines, providing an endless supply of energy to the world by solving puzzles.

“We’ve been through an iteration process to define the core game mechanics, and how they apply to each level and how they’d influence the illustration and animation,” said designer Jiannis Sotiropoulos.” Expanding their work with Varona and the visuals, Sotiropoulos said that, “During this process we played with the idea of having a more spiritual/naturalistic theme (so Inca deities and a shaman rather than a robot and a scientist) instead of the industrial/mechanical theme. But the robots and expressiveness stuck with us. We’re now working on more levels with different robots for each one.”

repair the machines so that they move in a perfect, harmonious loop

Each level of the game will be split into two parallel environments. Above ground, which will take up 20 percent of the screen, and below ground which will take the remaining 80 percent. At the beginning of each level, the lights will be sparse above ground and only shadows can be seen by the player. With each correct action, the scene will become brighter, signifying progress. Below ground, the player controls the scientist and must solve puzzles by interacting with the environment to repair the machines so that they move in a perfect, harmonious loop.

Impossible Bottles is slated to be released on iOS and Android in 2017. More information about the game and studio can be found here.