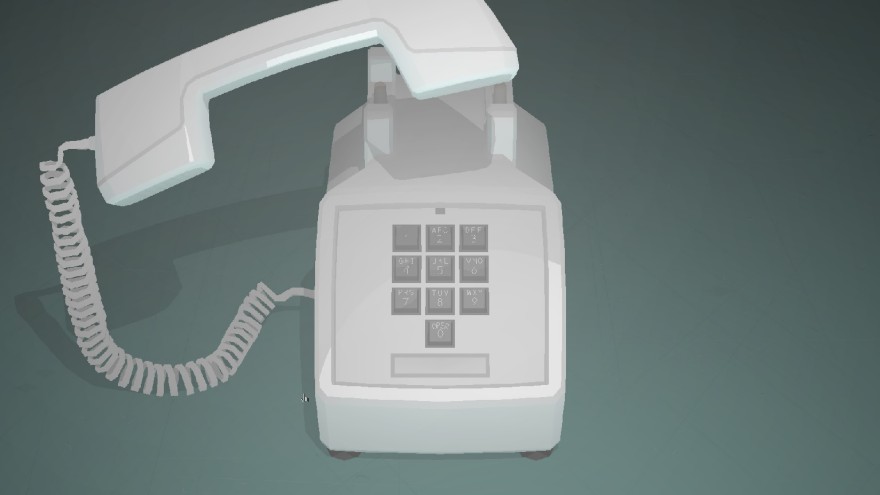 There’s a listing on eBay right now for a Western Electric model 2500 desk-style domestic telephone. It comes in a very gentle shade of pink, which its seller plaintively describes as being the most suitable color for delivering bad news—it’s “like whispering into a washed-out rose petal, by which I mean that it softens the blow,” they add.

The seller claims that they don’t remember how they came across this discovery. “Dashiell had piercing tinnitus that kept him up nights, and sometimes I would find him come morning hunched wincing over the receiver, dialing away, unsystematic and helpless. Maybe he came across it during one of those nights?” they write in the eBay listing.

input that number into the digitized model 2500, the mysteries begin to multiply.

There’s something unreal about this telephone, something intangibly unbelievable about it, even though there’s a video of it being delicately modelled from all possible angles, grabbed and touched by a pair of human hands.

Why does the seller offer such profound suggestions as using the telephone to listen to the dial tone and reflect? Why do they tell us that their daughter-in-law sometimes delivers packaged goods with a sprig of peppermint?

This widow, going by the eBay username “etown_phone_lady”, is not real. The “etown” refers to . The magical realist adventures of Kentucky Route Zero take place between Bowling Green and, yes, Elizabethtown. This is Cardboard Computer reaching out from the lonely highways of their fiction to place an enigmatic object from within it into our world.

But this Western Electric model 2500 telephone isn’t found within Zero. Instead, it’s the sole focus of the series’ third spin-off intermission game, which has just been released for free. And, while not pink, it’s certainly the same telephone in Cardboard Computer’s Here And There Along The Echo on account of the limitations of its utility; it can only dial the number 270-301-5797 (as the accompanying postcard indicates). If you lift the receiver off its cradle, pull it close to your ear, and input that number into the digitized model 2500, the mysteries begin to multiply.

After the dulcet, hazy chimes of a welcoming jingle, you discover that you’ve tapped into a drifter’s guide to the , made possible by the Bureau of Secret Tourism. Will (Oldham), your environmentalist backwater chump, will proffer various lines of information and advice attached to the numbers of the model 2500. “For historical sites along the river, press 1,” and so on.

a bite-sized revision of the pronunciation of the sonic language of bats.

It should be a familiar mode of service to just about everyone, but the informational resources are far from. The options are tailored to the presumed needs of beachcombing pilgrims, covering such specific circumstances as hearing organ music, holding a snake in your hand and what to do next, and a bite-sized revision of the pronunciation of the sonic language of bats. When there’s less absurdity, Will speaks gently in world-building sentences about underwater islands, a town with no roads to it and a population of horses, as well as the “Silo of Late Reflections.”

Once again, Cardboard Computer provides us a lingering taste of its bucolic Southern fantasy during the respite between chapters. And, don’t worry, recurring trio Emily, Ben, and Bob reappear once again when you least expect it. It’s a cleanser for the palate before Act 4 arrives at an unexpected date in our game-playing machines.

Now, who’s going to be the highest bidder for that telephone?

You can download Here And There Along The Echo for free right here.